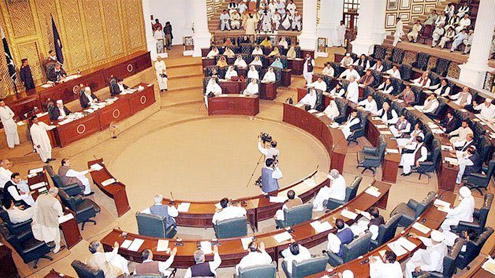 PESHAWAR: Opposition leader in the Khyber Pakhtunkhwa Assembly Sardar Mehtab Ahmad Khan on Thursday declared the provincial budget a ‘visionless’ document, which, he said, didn’t reflect manifestos of the ruling Pakistan Tehreek-i-Insaf and its coalition partners in the province.

The speaker had invited Mr Abbasi to begin debate on the budget after declaring him the opposition leader.The opposition leader said PTI had made lofty claims before the May 11 elections to do away with the status quo and change the system. “Like me, others also believed that PTI has the best brains and will bring revolution but sorry to say, this budget is bereft of any measure or vision to pass the benefit and relief to the people,” he said in an empathetic tone.

Mr Abbasi said the government did not introduce any visionary plan to scale up capabilities of police, ensure equitable distribution of resources among districts, bring about good governance and provide solution for the optimum utilisation of human and natural resources.“Honestly speaking this budget is a continuation of status quo. Few baboos in the finance department have prepared the budget, which was signed by the chief minister,” he said, adding that the government had tried to misguide people.

Criticising overall policies of the provincial government, the opposition leader said within 20 days, two members of the assembly had been killed in acts of terrorism and that was very unfortunate. He said PTI and its coalition partner, Jamaat-i-Islami, had assured that it would restore peace in the province.“Has the government put in place any plan to end violence and stop killing of innocent citizens, personnel of the law-enforcement agencies and officials in bomb blasts and in suicide attacks? The government did not include any plan for the capacity building of police in the budget,” he said.

He opposed umbrella scheme which he said empowered the chief minister to approve developmental scheme in the districts. The opposition leader said only two per cent of the annual development programme had been allocated to the district, which was unacceptable to the opposition. He spoke against promulgation of education emergency in the province and said the government did not have capacity for the implementation of the emergency.

“On one hand, the government is promulgating education emergency and on the other, private sector is encouraged by allocating Rs1.3 billion for private schools. The plan shows that the government has no faith in public sector schools,” he said.Mr Abbasi, who is a former provincial chief minister, said the government did not explain whether discretionary funds of the chief ministers and ministers had been abolished.He said under the 18th Constitutional Amendment, provinces had powers to install hydel power generation units but funds allocated for the hydel sector were insufficient.

“You (government) can’t generate a single unit of electricity by spending this meagre amount of money. It all will go to waste,” he said, adding that instead of installing solar lights in the streets, the government should use energy severs.Opposing the promulgation of energy emergency, the opposition leader said: “Don’t create sensationalistic among people through wrong slogans. The government should involve the private sector for hydel power generation, agriculture development and oil and gas exploration.” He called for heavy investment in health sector and asked the government to recruit more nurses and paramedics.

Mr Abbasi said in the budget speech, the finance minister had announced health insurance scheme for 20 per cent poor people that was illogical. He said around 60 per cent people of the province were living below the poverty line so it would be impossible for the government to make a mechanism for the segregation of 20 per cent poor people for the insurance scheme.The opposition leader said the government had projected seven per cent growth rate in the next three years but did not explain how it would happen. Parliamentary leaders Mohammad Ali Shah Bacha of Pakistan People’s Party-Parliamentarians and Sardar Hussain Babak of Awami National Party also spoke on the budget. – Dawn