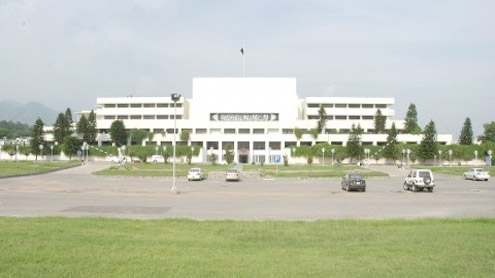 ISLAMABAD: The National Assembly on Sunday approved 19 demands for grants of Rs 183.36 billion for the Cabinet Division and its attached departments with majority of votes while rejecting all cut motions presented by the opposition.

The demands were presented by Finance Minister Ishaq Dar in the House while the opposition members submitted about 119 cut motions.Opening the debate on cut motions, Pakistan Tehreek-e-Insaf (PTI) leader Ghulam Sarwar Khan stressed the need for making the National Accountability Bureau (NAB) an independent institution to ensure equitable justice for all.He said the anti-corruption departments should be disbanded as they were doing nothing except corruption and victimising people.

He alleged that the Capital Development Authority (CDA) had become one of the main centres of corruption, where plots were provided to the bureaucrats and politicians while the common people were ignored.Dr Azra urged the government not to change the name of Income Support Programme as the previous government was running many projects under this programme to facilitate the poor segments of the society.

She said that the programme included Waseel-e-Haq, Waseel-e-Taleem and Benazir Youth Support Programme, which had been supporting the low income people.Sheikh Salahuddin said that the government should make a comprehensive drug control policy, besides ensuring proper training to the Cabinet Division employees.He said that the Prime Minister’s Inspection Commission, which he claimed was unnecessary, should be abolished.

Likewise, irrelevant departments that have been put under the Cabinet Division, should be transferred to their respective ministries to enhance their performance, he added.He said that the CDA’s budget was more than that of the Federally Administered Tribal Areas (FATA), while its employees were just working for their department instead of resolving the issues of Islamabad residents. – PT