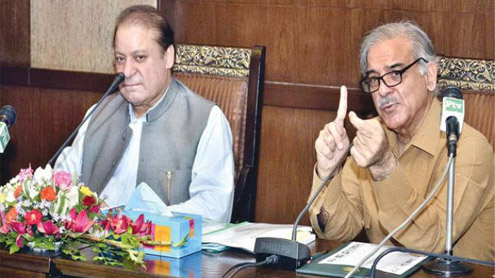 LAHORE: Prime Minister Muhammad Nawaz Sharif on Saturday  called for a more vigilant and modern policing coupled with an effective coordination among all relevant institutions to eliminate the menace of terrorism and crimes from the society.

Co-chairing a high-level meeting with Punjab Chief Minister Muhammad  Shahbaz Sharif on the Police Reforms issue, the Prime Minister said that police department must conduct the investigations on merit and submit their challans to respective courts for an early dispensation of justice to the aggrieved people.The Prime Minister directed the Punjab Acting Inspector General of  Police Khan Baig to chalk out a comprehensive strategy, while keeping  in view the optimum utilization of modern technology and equipment as well as a coordinated intelligence for better policing, and also sought a detailed presentation within a week.

The Prime Minister regretted that in Pakistan hundreds of innocent  people had been killed in terrorist attacks and bomb blasts, and even the public places, mosques and Imambargahs were attacked.“The monster of terrorism had severely affected the country’s trade and  economy and now the nation is facing the energy crisis and power load-shedding,” he observed.The Prime Minister said that police and other relevant departments would  have to bring necessary changes and reforms in their system to weed-out terrorism and crimes in an effective manner.

Chief Minister Muhammad Shahbaz Shahbaz Sharif apprised the Prime  Minister that the provincial government was devising a comprehensive policy to control weaponisation- show of weapons, its supply and cancellation of unnecessary weapon licences. The Prime Minister said, “I will fully support this initiative of de-weaponisation, as it is a great cause.”The Prime Minister also stressed the need for constituting a task-force  involving the private sector and social figures for this cause of purging the society of fatal weapons.He directed the Federal Interior Minister to expedite work on  ascertaining the genuineness of 34,000 weapon licenses issued by the last federal government.

Taking stock of ‘Thana Culture’ and negative image of police at  grassroots level, the Prime Minister directed for renovating the dilapidated police stations, besides training and capacity building of the policemen on modern line to bring it par at international standards.“Police councils consisting of notable and good character people,  retired bureaucrats and judges should be constituted at police stations level to maintain a check on the performance of the investigation process as well as find out of the box solutions to petty disputes without going into any legal/investigation procedures,” he opined.
The Prime Minister said that well-qualified and well-behaved young  people should be inducted in the police on merit in order to ensure quality and transparent investigations of the cases.

The Prime Minister said “I want to see a new citizen-friendly face of  the Police,” adding that it would help Pakistan to be transformed into a well organized society.During the briefing, the Prime Minister also agreed with suggestion of  bringing amendment in the relevant Police Laws to define and introduce  more practical role of the police department.The Prime Minister also stressed the need for exploring the possibility  of outsourcing the entire traffic system to manage the traffic flow in a better manner, as being done in the developed countries.

During the briefing, the Acting IGP apprised the Prime Minister and the Punjab Chief Minister that service centres would be set up where qualified staff in civvies would facilitate the public complainants, which would be forwarded to respective police stations. Qualified young people would be recruited for these centres as  Sub-Inspectors (SIs) for improving the quality of the investigation of cases.While, honest, competent and well-educated police officials would also be selected from the existing strength of the above mentioned purposes.

However, the Prime Minister pointed out that these new service centres  would not be able to  deliver any good to the aggrieved people, as their complaints were forwarded to that old and faulty police system for investigation. He cited “The people are really fed-up and exhausted of the ‘Thana Culture’ and negative behaviour of the police.”The Prime Minister directed that well-qualified and well-behaved young  people should be inducted in the police on merit in order to ensure quality and transparent investigations of the cases, adding that more female staffers also be inducted in the police department wherever needed.

He said that it would be better to recruit and train these qualified  young people en-bloc rather in phases, as it would help avoid any confusion, while performing their duties.The Prime Minister said if needed, the existing laws should be changed  or amended but to ensure maximum relief to the masses rather empowering the police further.He added that the witness and judges protection programme, which is functional in the developed countries, must be studied to make it part of Pakistani laws as well, because  provision of justice is the fundamental responsibility of both the federal and provincial governments.

The Prime Minister also stressed the need for increasing the courts  timings after taking the bar councils into confidence to give relief to the common man. He said the lawyers’ struggled hard for justice, which could never be forgotten, adding, they would welcome the decision in the larger interest of the citizens.While the Chief Minister Muhammad Shahbaz Sharif expressed the resolve  to eliminate the ‘Thana Culture’, adding that honest and competent policemen and the civil society members would be engaged in this regard.

The Chief Minister observed that dilapidated conditions and congested  locations of the police stations were also a source of fear and hesitation for the complainant to visit the stations. He directed for relocation of such police stations at prominent places, accessed easily by the people.The Chief Minister apprised the Prime Minister that Forensic Science  Laboratory established at a cost of Rs 3 billion, had substantially reduced the complications in the investigation of criminal cases.