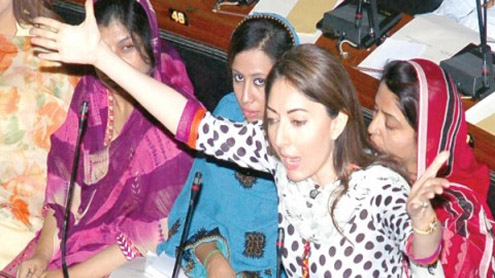 KARACHI: Amid calls from opposition benches for the audit of billions of rupees of taxpayers’ money dubiously spent by the previous Sindh government during its last five-year rule, the Sindh Assembly on Monday warned the Pakistan Muslim League-Nawaz (PML-N) government against the unconstitutional move of redefining sales tax on services.

As the provincial legislature was called to order by Speaker Agha Siraj Durrani, lawmakers from the two divides one after another took part in the budget discussion with the treasury, dubbing the proposed fiscal plan as “populist and pragmatic” and the opposition calling it the budget of “Waderas”.
The opposition members who delivered hard-hitting speeches on the budget were Syed Hafeezuddin of Pakistan Tehreek-i-Insaf (PTI), Masroor khan Jatoi of PML-N and Rehan Zafar of Muttahida Qaumi Movement (MQM) which shared power with the PPP during most of its past five-year reign.

NO TO FED ON FINANCIAL SERVICES

The House adopted a PPP-backed resolution calling upon the Sindh government to approach the federal government to withdraw the amendment in the new finance bill that, if passed by the Lower House, would redefine the word sales tax on services.“Sales tax on services is a provincial subject as per Constitution which was further clarified in the 18th Amendment,” reads the document tabled by PPP’s Jam Khan Shoro. “The imposition of FED on financial services as proposed in the federal finance bill is unconstitutional and should be withdrawn by the federal government,” the resolution added. PML-N lawmaker Irfanullah Marwat was opposed to the move contending that his side had not been provided with a copy of the resolution.

A second resolution came from the opposition benches where Khalid Ahmed of the MQM strongly condemned the brutal murder of sitting MPA Sajid Qureshi and his son Engineer Waqas Qureshi outside a mosque in North Nazimabad neighborhood last Friday.The MQM-backed resolution saw the solidarity of Pakistan in danger amid continued terrorist attacks on its lawmakers and workers.“This cowardly act of terrorism is not only a conspiracy to destabilise the peace of Karachi but also against the solidarity of Pakistan,” it read. The resolution demanded the Sindh government to take all necessary steps to arrest and apprehend all terrorists, their facilitators and perpetrators.

PPP’s Sharmila Faruqui, whose political speech in the post-budget session turned the house into a fish market, introduced a third resolution paying homage to her party’s slain chairperson Benazir Bhutto on her 60th birth anniversary.

Commenting on the budget, Masroor Jatoi of the PML-N held the PPP-led Sindh government accountable for overuse and misuse of public funds during its five-year tenure to no avail. Citing budget documents, he said the government’s inability to increase revenue and cut its non-development expenditures in FY13 had widened the budgeted Rs 7.1 billion deficit to Rs 16.5 billion.

Similarly, he said the government had missed its Rs 478.544 billion current revenue collection target during the outgoing FY13 and had to revise the same at Rs 439 billion. “Perhaps those organisations did not have enough confidence in the (Sindh) government that they did not release the funds,” Jatoi remarked.Calling it a failure of governance, the PML-N legislator also questioned the output of billions of taxpayers’ money spent on mega projects like Thar coal. He said that despite incurring, on average, Rs 50 billion the project was far from producing the much-needed electricity.

Also, he said, the government’s five-year spending of over Rs 30 billion on improving law and order in the province reaped no fruit. “We have the worst situation today,” he claimed. Jatoi also cast doubts on transparency in the government’s allocation of over Rs 63 billion in two different budgets for the recruitment of 1000 personnel as member of Rapid Response Force. Education standards in Sindh, he said, were poor despite the government’s claim of having spent Rs 100 billion over last five years. The PML-N lawmaker also questioned the usage of around Rs 4 billion budgeted for Karachi Circular Road that, he claimed, were seen nowhere.

Calling for a thorough audit of Benazir Income Support Program and the billions spent by government during last five years, Syed Hafeezuddin of the PTI termed the budget as that of “Waderas”.The PTI lawmaker proposed a 400 percent increase in targeted agriculture tax that, he said, was being collected at a nominal rate of 0.6 percent from the small farmers and big feudal lords alike.Demanding monitoring of the financial rules and accountability thereof, Hafeezuddin also called for taxing the Afghan Transit Trade using the province’s roads. He also slammed the government for imposing four instead of 16 percent GST on the “builder mafia”.

WHERE IS TAXPAYERS’
MONEY: MQM

Rehan Zafar of the MQM, calling for inclusion of standing committees in the execution of budget, questioned the government over the usage of Rs 1.9 billion allocated in FY11-13 budgets for development of Sindh Dairy and Bhambor Dairy projects.He said then finance minister Murad Ali Shah had claimed in FY12 that the Sindh government had spent Rs 644 billion during on account of development against Rs 310 billion spent in last 60 years of Pakistan’s history. “Did we really see that development in Sindh during last five years,” he asked.Mehtab Rashdi of PML-F and Heer Soho of MQM also raised different questions about the allocation and usage of budgetary uplift funds. On treasury benches, Husnain Mirza termed the budget as “populist and pragmatic”.

A noisy pandemonium was witnessed in the house when Sharmila, in her budget speech, started pointedly criticising the opposition parties using sarcastic names like “Raiwand Ka Shair” (the lion of Raiwand).This brought opposition members like Nusrat Seher Abbasi of PML-F and Samar Ali Khan, Dr Seema Zia and Hafeezuddin of PTI on their feet requesting the chair to stop the “political speech”.MQM’s Deputy Parliamentary Party Leader in Sindh Assembly Syed Sardar Ahmed interrupted saying the members should stick to comments on budget instead of getting indulged in a noisy “women fight”.

Deadly attack in Kashmir ahead of India PM trip

Deadly attack in Kashmir ahead of India PM trip