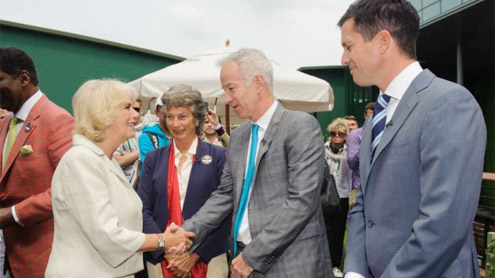 The BBC was yesterday embroiled in controversy after three of its presenters ‘gatecrashed’ an official line-up with the Duchess of Cornwall at Wimbledon.

The trio appeared to breach royal protocol by sneaking into the ‘meet and greet’ with their microphones still on – allowing Camilla’s private conversations to be broadcast.Millions of viewers watching BBC2’s live coverage were able to hear the Duchess clearly say she feared she was ‘too old’ to play tennis.It contravened the strict rules that govern such meetings with the royal family, with media prohibited from recording what is being said.

The stunt was pulled by former players John McEnroe, Virginia Wade and Tim Henman, who left their own live chat to join the queue to shake Camilla’s hand.Clearly baffled , fellow presenter Sue Barker was heard to say, ‘Now what is [sic] Mac, Tim and Virginia doing? They have just left me… alone.’The three were then shown sniggering as they hovered at end of the line of dignitaries, which included both staff and veteran players.On coming to the end of the line, Camilla turned to walk off – only for Miss Wade to step up and reach in to shake her hand.She said: ‘Good to see you, it is so wonderful to see you. Thank you for coming.’

Her microphone, which should have been switched off, then picked up the Duchess saying: ‘I have got my sister here today. We used to come to watch you year after year.‘Nice to sort of catch up again.’ John McEnroe then stepped in to introduce himself, asking the Duchess if she played tennis.She said: ‘Oh, oh, very badly…I would love to start again but maybe I’m too old.She added: ‘Well it’s third time I’ve been back last 15, 10 years. I’m going to keep going.‘My sister and I used to be here every year so it’s nice to be able to catch up again. See all of you.‘And if we can’t see you, we watch you on the telly.’

Tim Henman also spoke to the Duchess, although the conversation was inaudible because of other background noise.Camilla, who later sat in the Royal Box with her sister, Annabel Elliot, was introduced to ball-girls and ball-boys working at the All England Club during the meet and greet.She was also introduced to French Wimbledon hopeful Richard Gasquet and former tennis players Tom Gullikson and Vijay Amritraj.Afterwards, when asked by Mrs Barker whether they had been invited to the event, Mr Henman laughed and admitted, ‘We gatecrashed it.’He later said he was unaware the comments were broadcast live.

A Clarence House spokesman said the remarks were made during an ‘impromptu’ conversation and the Duchess was aware that the BBC had been broadcasting live on the balcony.According to the All England Club, the presenters would have been allowed to join in because it took place on the players’ lawn and all three are veteran tennis players.But it is unlikely that the Duchess realised the presenters would be coming to talk to her with their microphones on.Her comments caused an immediate stir on Twitter, where one user wrote: ‘Protocol… Mikes should be off at Wimbledon for these conversations.’Another wrote: ‘It’s very bizarre. 3 of the BBC commentators have just joined the line up to speak to Camilla – but they’re mic’ed up so we can hear all!’Last night, the BBC refused to comment on the incident. – DailyMail