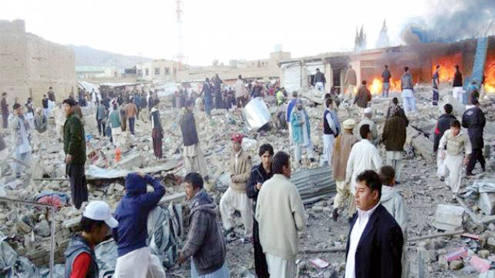 QUETTA: A complete shutter-down strike was observed in Quetta on Monday against a deadly suicide attack on the beleaguered Hazara community which claimed 30 lives, including women and children, and left 65 injured.

The strike call was given by the Majlis Wahdat-e-Muslimeen (MWM) and Hazara Democratic Party (HDP). All the shops and trade centres were closed during the day, while all the main roads, including Alamdar Road, Brewery Road, Tughi Road, Jinnah Road, Liaquat Bazaar, Abdul Sattar Road and others presented a deserted look. The banned outfit Lashkar-e-Jhangvi had claimed the responsibility for the ghastly attack. The police sources said that the death toll from the attack had risen to 30, including nine women and three children.

The funeral prayers of the dead were offered in Hazara Town and the victims were buried in Hazara Town graveyard. A large numbers of people from the Hazara community, including the MPA Muhammad Raza, were present during the burials. Two dead bodies were sent to Afghanistan for burial. The government of Balochistan has formed an investigation team of six members under SP (Investigation) Muhammad Tariq to probe the case.

A case of the suicide attack has been registered against unidentified people in the Brewery Police Station. The case was registered on behalf of the SHO of the police station. Balochistan Chief Minister Dr Abdul Malik condemned the attack on the Hazara community and conveyed his condolence and sympathies to it. He also announced to cancel all his political activities in Islamabad and leave for the provincial capital. In Quetta, on Monday, he visited the Combined Military Hospital (CMH) to inquire about the health of the injured. The chief minister also announced to provide free health care to all the victims of the blast.

The Majlis Wahdat-e-Muslimeen MPA Muhammad Raza demanded a targeted operation in Quetta against the elements responsible for the attack, saying that for security and peace such operations should begin from his own doorstep. He, however, said that the government is new and must be given time to tackle all the issues. – DailyTimes