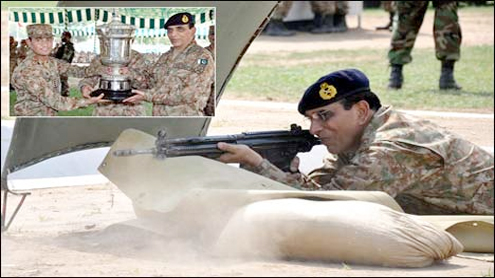 RAWALPINDI: General Ashfaq Parvez Kayani, Chief of Army Staff, has urged the Commanders to strive for excellence in all fields.

According to Inter Services Public Relations (ISPR), the COAS was speaking at the concluding ceremony of Army Firing Competition 2013.The Army Chief said that highest standard of training and quest for continuous improvement is the hallmark of any professional army.He urged the Commanders to strive for excellence in all fields, saying ‘our objective being the best Army in every aspect’. He showed complete satisfaction on the standard of shooting skills achieved by the individual soldiers of Pakistan Army, meeting all objectives set for the Year.

It is of note that in accordance with the training doctrine of Pakistan Army, General Ashfaq Parvez Kayani, Chief of Army Staff, had declared the Year 2012-13 as the Year of Firing with the aim to enhance the firing efficiency of individuals and units.

A number of new and innovative steps have been taken to realize the concept. In this regard, an Army Marksmanship Unit has also been established, which is a quantum leap towards improvement of firing standards of soldiers of Pakistan Army. Yet another step is conduct of firing competitions within the Army on new format using latest techniques. Similarly, a number of improvements in weapons and ammunition have also been introduced.