PTI chief not to attend meeting on national security 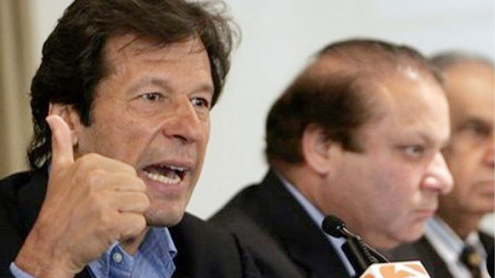 ISLAMABAD: It may just be a coincidence, but Pakistan Tehreek-i-Insaf (PTI) chairman Imran Khan will be out of the country when Prime Minister Nawaz Sharif will be hosting a meeting of the heads of political parties to formulate a national security policy.

The absence of Mr Khan from the meeting will surely be noticed because the PTI has emerged as a major political force after the general elections and the party has been stressing the need for a national counter-terrorism strategy.The PTI will be represented at the meeting by its vice-chairman Shah Mehmood Qureshi and Khyber Pakhtunkhwa Chief Minister Parvez Khattak, who is also the party’s secretary general.Dr Shireen Mazari, the spokesperson for the party, said Mr Khan’s visit to the UK was scheduled before the government announced its plans to convene the meeting in the parliament house.

“The PTI chairman has an appointment for medical check-up which can’t be deferred,” she said.Mr Khan, who is recuperating from a back injury he suffered due to a fall from a lift during an election rally, will be staying in London till July 24 where after medical check-up he will be spending some time with his sons.Ms Mazari said the absence of Mr Khan from the meeting would not make any difference because, according to her, the government had nothing concrete to discuss at the meeting. She said that like previous such events, the proposed meeting would prove to be a futile exercise.

Before the government announced its plans to convene a meeting on national security, the PTI-led Khyber Pakhtunkhwa government had demanded of the federal government to organise a meeting with the army chief so that something tangible on security issues could be discussed.Two previous such meetings organised before the general elections by the Awami National Party and Jamiat Ulema-i-Islam-Fazl were boycotted by the PTI.

Ms Mazari said the PTI representatives would attend the proposed meeting and gauge the government’s seriousness in addressing the issue of militancy. The PTI would give its suggestions and see how this initiative was taken forward by the government, she added. INTERIOR MINISTER: Talking to media personnel in his office on Thursday, Interior Minister Chaudhry Nisar Ali Khan said that Chief of Army Staff Gen Ashfaq Parvez Kayani would be invited to the proposed meeting.

He said participants of the meeting would include the four chief ministers and heads of all law-enforcement agencies.The minister said unlike previous such meetings, the government would seriously consider recommendations to be made by politicians in finalising the national security policy.