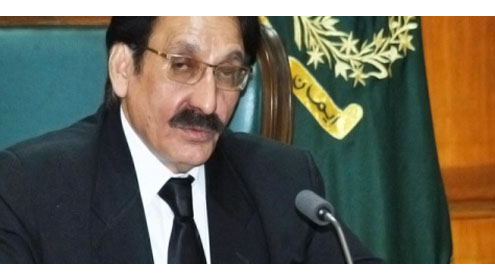 “I shall not hear the plea for cancelling the bail granted by the high court to Pervaiz Musharraf and the appeal filed by advocate Aslam Ghuman should be listed before another bench of the Supreme Court”, remarked the CJP.During the hearing, the Chief Justice directed the Register office to refer the case to another bench and fix hearing for next week.

The Islamabad High Court (IHC) had rejected Musharraf’s pre-arrest bail in a case pertaining to the detention of superior judiciary judges in 2007 emergency in the country which was imposed by Musharraf following suspension of Chief Justice Iftikhar Muhammad Chaudhry. A division bench of the IHC, while granting bail to the ex-military ruler, had held that there was no record to determine the role of Musharraf in detaining over 60 judges after November 3 2007 emergency.

The appellant asserted that the IHC order was illegal, unjust arbitrary which resulted in grave miscarriage of justice and high court had not followed the dictums of Supreme Court in its true prospective.“The judges of the high court could not delete section 7 ATA while deciding the petition for bail after arrest”, he added. He said that deletion of the 7ATA had prejudice his case against Pervez Musharraf.The bail-suspension case was filed by petitioner Aslam Ghumman Advocate challenging the Islamabad High Court order disposing off the treason charges and allowing bail to be posted for Pervez Musharraf in the Judges detention case.The complainant has prayed to the apex court to set aside the decision of the IHC and order arrest of Musharraf. – DailyTime

Abbottabad Commission’s report on Osama’s stay in Pakistan, US raid