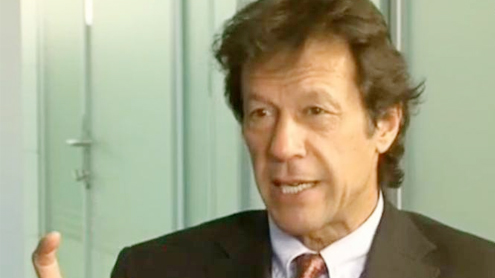 ISLAMABAD: Pakistan Tehreek-e-Insaf (PTI) Chairman Imran Khan on Monday left for a two-week visit to the United Kingdom for his medical check-up and some family engagements amid fears about his recovery from the spinal injury he had suffered on May 7.

Khan, who had a fall from a forklift before the general election, is still nursing his injuries and would undergo a medical check-up in London.This would be his first foreign visit after the rise of the PTI at the national level after the May 11 election.Talking to APP, PTI Information Secretary Shireen Mazari contradicted the reports that Khan would be holding meetings with British authorities seeking action against suspects allegedly involved in the brutal murder of PTI leader Zahra Shahid Hussain.

“I don’t know who is fuelling such rumours,” she said, and added that Khan’s visit had already been planned and it was strictly private in nature.However, she could not hide her concerns about Imran Khan’s health. “He is not totally fit yet. He would visit a spine specialist there while some physiotherapists would also help in the rehabilitation process (for his back),” she asserted.During his absence, PTI President Javed Hashmi would be looking after the party’s affairs, while PTI Vice Chairman Shah Mehmood Qureshi would look after the affairs of the parliamentary party.

A PTI source told APP that though Khan had been treated by top medics in Lahore, the pace of his recovery was “very slow”, and Khan and his aides were not satisfied with the treatment.“If needed, Khan may extend his stay in London,” the PTI source said, adding that the party chief would also attend some fundraising functions for Shaukat Khanum Memorial Cancer Hospital and Namal University. – DailyTimes