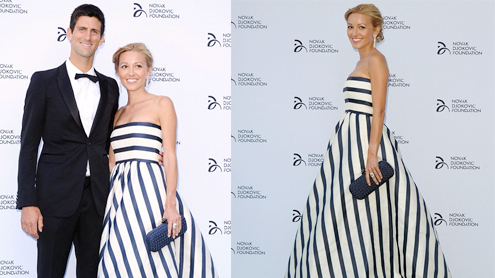 He suffered a crushing defeat at the hands of Andy Murray in the Wimbledon men’s final on Sunday afternoon.

But Novak Djokovic seemed to have put his loss behind him as he hosted a star-studded gala dinner in aid of his Novak Djokovic Foundation on Monday night.And the 26-year-old tennis star’s stunning girlfriend Jelena Ristic proved he is still very much her champion as she proudly posed alongside her man on the green carpet at London’s Roundhouse venue. The Serbian sportsman looked every inch the dapper gentleman as he arrived at the gala dinner, wearing an immaculately tailored black suit, which he teamed with a crisp white shirt and bow-tie.But Jelena was the one who truly commanded attention on the green carpet, opting for an eye-catching navy and white strapless gown, featuring a nipped-in waist and full skirt.

The swimwear model wore her honey blonde locks swept up off her shoulders into a stylish up-do, and accessorised with glittering diamond drop earrings and a navy clutch bag.Proving she is every inch the doting girlfriend, Jelena worked the star-studded crowd like a true professional, chatting to stars from the worlds of showbiz and sport with ease.And the event certainly pulled in a stellar crowd, with the likes of Hollywood actress Kate Hudson, supermodel Naomi Campbell, actor Gerard Butler and retired tennis champion Boris Becker turning out to do their bit for the charity.

The inaugural foundation dinner was even given the royal seal of approval with Sarah Ferguson and her daughters Princess Beatrice and Princess Eugenie also putting in an appearance. In spite of her cool, calm and collected appearance, Jelena, 27, recently admitted being the long-term girlfriend of the world’s number one tennis player is by no means an easy task. Speaking last week, she told the Mail: ‘You can get very passionate when watching your boyfriend from the players’ box. We just want them to be happy. You don’t want to see them in pain. If they are not happy, neither are you.

‘But I have to be careful as I don’t want to get too emotional and distract Novak. It’s about what the guys want.’We don’t want them to see us get emotional. When I’m at home watching him on the TV, I get even more passionate because I know the cameras aren’t on me.‘My job is to keep Novak clam and relaxed before his matches. We are emotional partners. The emotional support we give to each other is very important. It’s the same for me as well. He is very supportive and encouraging of the work that I do.’The Novak Djokovic Foundation is raising funds in the hope that every child in Serbia, the tennis star’s native country, can have the necessary education and resources to lead productive and healthy lives. – DailyTimes