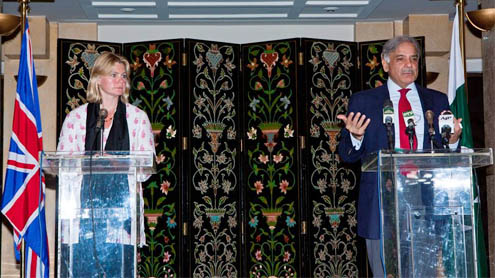 ISLAMABAD: United Kingdom and the government of Punjab committed to expand job skills programme to 18 districts of Punjab and provide better health and education facilities for millions of people.

Punjab Chief Minister Shahbaz Sharif and United Kingdom’s Secretary Development Justine Greening told media Wednesday night here after a meeting that both governments will continue to work together to create skilled jobs and provide better public services to millions of people in Punjab.

The Chief Minister said UK’s Department for International Development will spend Rs. four billion in Punjab for various programmes.While Punjab will invest Rs. 70 to 80 billion in next five years to provide missing facilities in thousands of schools and ensure that every child goes to school.Chief Minister Punjab said, “Employment is the dignified route out of poverty. Thanks to our collaboration with the UK, this training scheme has helped thousands of people helped earn a livelihood.”

“It has been a real success which is why we are expanding it to another ten districts, and hope to take it across the whole province in the future,” he added.Secretary Greening said, “The UK and Government of Punjab has a strong and successful partnership. We will continue to work together, with the UK supporting the government of Punjab to deliver on its ambitious commitment to create more jobs, stimulate growth, transform education and provide better public services to millions of men, women and children in Punjab.”“We announce that 135,000 of the poorest women and men in Punjab will be trained in job skills by 2015; some 20,000 have already been trained (half of them women) over the last couple of years and are now earning more money to help lift their families out of poverty,” she added.

Secretary Greening said,”The UK will continue to support the government of Punjab to expand this successful job training scheme.”The skills training scheme currently operates in four districts in Punjab including Bahawalpur, Bahawalnagar, Lodhran and Muzaffargarh. Based on the success in these districts, the programme will now expand to another ten districts including Lahore, Sheikhupura, Gujranwala, Faisalabad, Sargodha and Chiniot.“UK will support the government of Punjab to recruit and train 45,000 new teachers, and improve test results in core subjects including Maths and English. Due to our work together, already an additional 35,000 teachers are turning up in schools and 75,000 more children are attending schools every day. More than 3.3 million children in schools in Punjab will benefit from our support by 2015.”

Pakistan is now one of the UK’s largest recipients of development investment.Over the coming years, UK will invest heavily in supporting economic growth by enabling millions more to access financial services for the first time, such as microfinance loans, so that they can lift themselves out of poverty.Other priorities for the UK include working with Pakistan to benefit four million children in schools and decrease the maternal mortality rate by funding skilled midwives, nurses and doctors for one million safe births. – APP