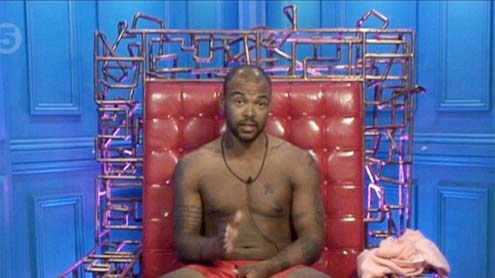 What started as a pillow fight turned into a tense interaction between Daley Ojuederie and Hazel O’Sullivan, leading to his removal from the Big Brother House.

Daley grabbed Hazel by the throat and pushed her back onto the bed, whispering ‘I’ll finish you’  before Big Brother intervened.Speaking in the diary room, the former boxer didn’t seem to think his behaviour was out of the ordinary.Hazel was called into the diary room, and told them, ‘Maybe he’s an aggressive man – I don’t know where it went from being friendly banter to that.”I felt threatened – him being the only male presence.’

Hazel was issued a formal warning for pulling Daley’s shorts down and slapping Daley’s behind.Daley was told his behaviour was threatening by telling Hazel ‘have some respect for your f****** elders or I’ll nut you one.’He was shocked that Hazel said that she felt threatened, no doubt feelings of betrayal emerged from his closest friend in the house.’How come we were cuddling after it happened?’Hazel is the most devious person and liar as well. I’m very offended. She’s disrespected me,’ was his final words before leaving the house.

The incident began when alone in the safe house together, Hazel invited Daley to ‘cuddle’ and ‘hug’ at night while they were in bed, which led to a number of playful interactions between the two.Having a pillow fight, was followed by Hazel hitting and slapping Daley, before stealing his duvet which then led to the male housemate’s aggressive behaviour.A representative for the reality programmer told the Mail Online: ‘Due to threatening and aggressive behaviour towards Hazel O’Sullivan we have taken the decision to remove Daley Ojuederie from the Big Brother House.’

Meanwhile, Daley’s girlfriend Katie Corriette took to Twitter on Monday evening to respond to questions from Big Brother viewers.And when one viewer asked her ‘Is the Daley you thought you knew usually aggressive??’, Katie replied: ‘No way.’Earlier in the day the safe housemates Daley and Hazel had to conduct probing interviews to try and find out who the other contestants really are.They were given a file on each housemate to lead their questions.

Hazel asked Charlie if she felt she had led Callum on, and Charlie said ‘yes’. But it wasn’t just Charlie who had an issue with him as a number of the other housemates also said they would like him to leave the most.Jackie said Dexter has no chance with Charlie: ‘He doesn’t stand a chance with Charlie – yes I’d be upset if he became my son-in-law.’Callum and Charlie were set up on a date, but it had a sour ending after she told him exactly how she felt about him.Callum took it badly and said: ‘I’m probably saying more to you know than I’ve ever said to any girlfriend, I’ve said more in front of these cameras… about how little I feel I’m worth and that’s all I can say now.He then had a cry in the bathroom while Dexter and Charlie shared some pancakes. – DailyMail