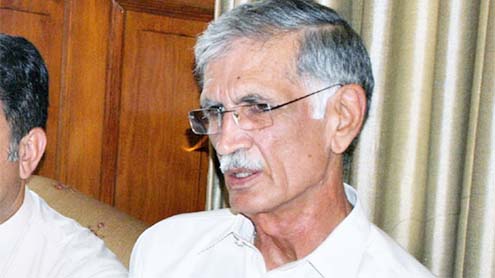 PESHAWAR: The Khyber Pakhtunkhwa government has decided to hand over all the industrial estates to the private sector and provide them cheep electricity to revive sick industrial units in the province.

Talking to a delegation of local industrialists here on Thursday, Chief Minister Pervez Khattak said that necessary instructions and guidelines had been issued to the quarters concerned to implement the decision of handing over all the industrial estates to the private sector so that.the closed and sick industrial units in the province could be revived.The chief minister discussed with the delegation various matters related to the revival and development of industrial sector and problems faced by industrialists in the province.

The delegation was led by chief executive of Frontier Steels Noman Wazir. Other members of the delegation included Riaz Arshad, Haji Afzal, Umar Zakori, Malik Niaz, Zahid Shinwari, Mohammad Tahir, Imtiaz Ahmed, Naeem Shahzad and others. High ranking officials of the industry and other departments were also present on the occasion, said a handout.The chief minister said that by handing over industrial estate to private sector industrial and economic activities could be enhanced to create employment opportunities in the terrorism-hit province.

On the occasion, various matters related to Drug Regularity Authority, Sarhad Development Authority and Small Industries Development Board came under discussion and the chief minister issued directives to the quarters concerned to this effect.The chief minister assured the delegation that the provincial government would resolve the problems faced by the industrialists on priority basis and provide all required facilities to them. – Dawn