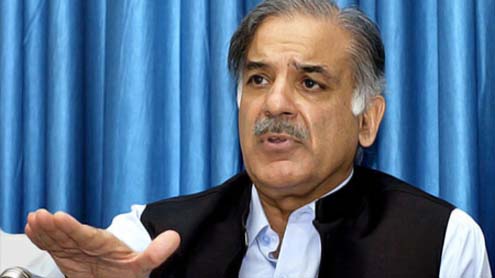 LAHORE: Chief Minister Punjab Muhammad Shahbaz Sharif has said the black sheeps involved in pilferage of electricity and gas will be exposed and dealt according to the law.

He stated this while visiting a textile mill near Adda Sadhar Jhang Road, Faisalabad, accompanied by Prime Minister Muhammad Nawaz Sharif, where large scale pilferage of gas was detected.The chief minister said Pakistan was facing energy crisis and the elements involved in theft of gas and electricity must be awarded stringent punishment as they were usurping rights of the masses.He directed DCO Faisalabad to continue operation to curb gas and power theft, disregarding all pressure and influence.

Sharif directed that cases against such elements should be pursued vigorously. He said steps were being taken on emergent basis for resolving energy crisis and besides setting up new power generation projects, curbing electricity theft and line losses was of vital importance.District Coordination Officer Najam Ahmed Shah, during a briefing, informed that theft of gas was detected through a successful operation in the textile mill and according to an estimate, gas worth Rs 270 million was being pilfered annually.

He said six cases of gas theft had been detected in Faisalabad with pilferage of gas worth Rs 400 million annually. Later, Sharif along with the PM Nawaz Sharif, during a meeting with representatives of industrial and business organisations said government had fixed its priorities for solution of the problems being faced by the country and besides elimination of load-shedding, the system of supply of gas and electricity will also be improved.

He said industrial and trade sectors were badly affected by the rampant corruption in the past. The CM assured industrialists, traders and businessmen that no effort would be spared for the solution of their problems and assured everybody will soon witness a visible change.MNAs call on CM Punjab: Members of the National Assembly, Asma Mamdot and Nasir Bosal met Punjab Chief Minister Muhammad Shahbaz Sharif, on Monday. The assembly members informed the chief minister about development projects and problems of people of their respective areas. – DailyTimes