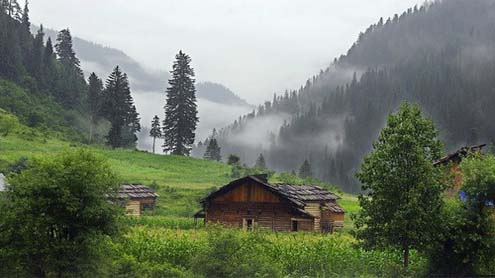 Success stories can be rare in Pakistan, but business is booming in one Kashmir tourist spot as the region rebuilds after a devastating earthquake and shrugs off associations with violence.

Hundreds of thousands of local tourists drawn to the lakes and glaciers of the Neelum valley are injecting desperately needed money into one of the poorest parts of the country.Westerners stopped coming to the Himalayas of Pakistani-Kashmir years ago.But with a new road built by the Chinese after the 2005 earthquake killed 73,000 people and a ceasefire holding with India, locals are discovering the snow-capped peaks, glaciers, lakes and lush-green meadows of the Neelum valley.

Known locally as “Paradise on Earth,” the valley is 114 kilometers east of the base camp where gunmen shot dead American, Chinese, Lithuanian, Slovakian and Ukrainian climbers in June.It was the worst attack on foreigners in Pakistan for a decade, but in neighboring Kashmir, few are worried.“There is a bit of fear there, but overall we are enjoying ourselves and we will stay according to our plan,” said Mohammad Amir, a lawyer on holiday with his family from southern Punjab. Munazza Tariq, a university student from Karachi, agrees.

“This was carried out by enemies of Pakistan. After it happened, we received a lot of calls from our relatives from Karachi, but we are safe and enjoying ourselves,” said Munazza.Local tourism ministry official Shehla Waqar says 600,000 people visited Neelum last year compared to 130,000 in 2010, before the Chinese built a road linking the area to Muzaffarabad.“There is an influx of tourists in the area because we have a very beautiful road from Muzaffarabad to the Neelum Valley,” she said.The nearby Line of Control slices apart the Indian and Pakistani-held zones of the Himalayan region where a ceasefire has held since November 2003.

“This area is very peaceful and there is no fear of terrorism,” said Waqar.Taliban attacks in the northwest and the impact of crippling power cuts pushing people towards balmier climes is also driving visitor numbers higher, Waqar said.There are now 115 registered guest houses in the Neelum valley, local deputy commissioner Mohammad Farid told AFP, compared to none in 2010.The authorities say they have stepped up security after the climbers were killed in Gilgit-Baltistan, but because tourists in Kashmir are locals rather than foreign, they are not braced for a serious knock-on effect.

“We have strict instructions that all government and private guest houses are to close their main gates at 10 pm,” Kashmir tourism minister Abdul Salam Butt told AFP.“No doubt this incident has damaged international tourism in Pakistan, but it won’t affect Kashmir because we host domestic tourists,” he added.Raja Zarat Khan, who owns a private guest house, said he was fully booked into the next week and he had no cancellations.

I’m having a great season,” he said.Mohammad Awais, 44, runs a restaurant, a string of guest houses and now also takes tour groups to the Neelum Valley.“This business has changed my life. Last year I did excellent trade because I gave tourists a lot of incentives: hiking, trekking, fishing, boating. The environment in Neelum Valley is very good. Once you enter the valley, no one wants to leave.”

He also doesn’t expect the Gilgit shootings to have a major impact.“It hasn’t made a big difference – perhaps four to five per cent because the elite class, who come here, feel insecure, but no one has cancelled any bookings. People are still coming,” he said.The boom is welcome in a region where many men have traditionally left behind their families to work in Pakistan’s largest cities.

Awais has hired cleaners, cooks, drivers and tourist guides: all men who would otherwise be unemployed.Suppliers have benefited. Villagers even sell their freshly grown cherries, apricots and plums to tourists.But others warn that more needs to be done to sustain the boom across the rest of Kashmir.“There are some beautiful places in our area, but there are no proper roads available and the tourists can’t go to these areas,” said Khawaja Abdul Samad, who is thinking about opening his own hotel. – PT