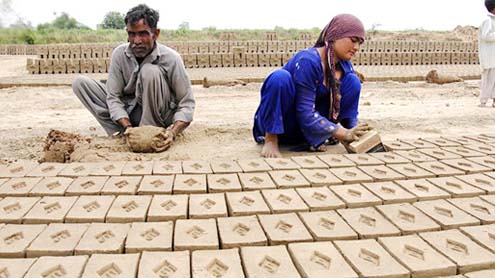 ISLAMABAD: The federal government’s commitment towards the working and labour classes can be gauged by the fact that despite a lapse of around one month, a notification about rise of the minimum wage from Rs 8,000 to Rs 10,000 has not yet been made by the government.

The National Assembly had approved the provision of minimum wage raise in the Finance Bill 2013 which was passed on June 27. Initially, the provision was not a part of the finance bill but Finance Minister Ishaq Dar made the announcement to increase the minimum wage to Rs 10,000 on the recommendation of Senate Finance Committee on June 21.

The delay in notification means that millions of low-paid workers would be deprived of their basic right as the Employees’ Old-Age Benefits Institution (EOBI) would not be able to get deductions for workers benefit from different departments according to the pay raise. Interestingly, neither the office of the federal secretary, Ministry of Human Resource Development, nor any other high-ranking official of the Ministry of Human Resources know that they have to make the notification in this regard to enable the EOBI to enhance deductions for pensions from parent organisations of workers from different public sector organisations so pension and other benefits could be increased accordingly.A source in the ministry of HRD said no notification had yet been issued by the ministry.

The source said that only when the ministry would issue the notification, the EOBI would be able to increase its deduction from the parents departments of the government for pensions. “Previously, we were making the deductions against Rs 8,000 minimum wage while now from July 1, we would have to make deductions against minimum wage of Rs 10,000. But if raise is not notified, we will follow Rs 8,000 pay model,” the source said, adding that the notification was mandatory to help increase deductions for pensions of the employees.

It was a tradition that the prime minister announces minimum pay raise in his speech on Labour Day each year on May 1 which is subsequently notified by the ministry of HRD. “However, the caretaker PM did not announce the raise this year leaving the matter to elected leadership,” the source added.When contacted, HRD Secretary Munir Qureshi was not available for comment. Nawab Din, his private secretary (PS), promised to come up with a response, stating that the notification had to be made by the Finance Ministry. However, he did not respond later despite repeated calls.

Mohammad Asif, PRO for the ministry, said the subject of minimum wage had been devolved to the provincial governments. He said that under the law, the notification by the HRD ministry would enable the EOBI to enhance deductions for pensions of the workers of different public sector organisations so that pension could be made upon retirement. However, the EOBI had not been devolved and was working under the HRD ministry.No official response could be obtained to this.

The minimum wage is meant to be a tool for combating poverty and preventing unfair wages. A federal minimum wage was first set in 1938 by The Fair Labour and Standards Act in the US. Monthly minimum wages in Pakistan are recommended by the federal government under nationally-applicable labour policies and set by the Provincial Minimum Wages Board under the Minimum Wages Ordinance, 1961.