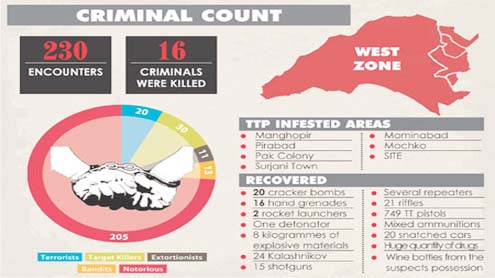 KARACHI: Despite continuous targeted operations by West Zone police, in which at least 1,530 suspects have been arrested, people are still loosing their lives on a daily basis.

A majority of the detainees were released after questioning; some of them were booked in petty crime, with only a few remaining in custody of law enforcers.SSP West Zone Asif Ejaz claimed to have detained 1,530 suspects including target killers, extortionists and other criminals in different raids and operations.Moreover, in 230 encounters, at least 16 criminals were killed, while 20 terrorists, 30 target killers, 11 extortionists, 13 bandits and 205 notorious criminals were apprehended.

Earlier on July 14, SSP Ejaz claimed they nabbed four alleged terrorists belonging to a banned outfit in Musharraf Colony and recovered three Kalashnikov and three hand grenades from their possession.Despite the tall claims made by the police ahead regarding arrest of several suspects including TTP Karachi chief, terrorists continue to successfully achieve their illegitimate goals.

Not only the common public, at least 104 cops have also been shot dead in various incidents of target killing, a high number compared to previous years.The cops were mostly attacked on duty, or on the road in TTP dominated areas.A police official wishing to remain anonymous said that the police morale has suffered a massive decline this year, as they are unable to avenge the deaths of their fellow colleagues.

The official said that people who “appeared like policemen”, workers of secular political parties and anybody thought to be a “spy” has been targeted and killed by the TTP.It is worth mentioning here that the city has been divided between terrorists from outlawed organisations and secular forces. – DailyTimes