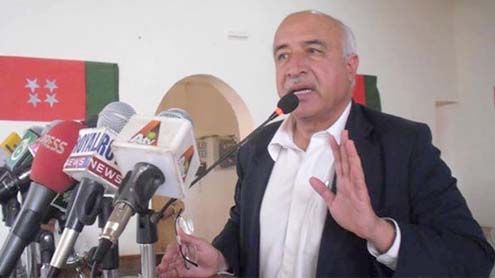 QUETTA: Balochistan Chief Minister Dr Abdul Malik Baloch assured the legislators in the provincial assembly session held on Wednesday evening that his government would ensure curbing terrorism and restoring peace in the province.

He was delivering his speech in the assembly session that was presided over by Speaker Mir Jan Muhammad Jamali. CM Baloch said, “No body can say that now ministers and MPAs are involved in kidnapping people for ransom. Law and order problem is multi-dimensions issue, however, we are taking serious steps to curb terrorism and restore peace in the province”.He said that he was calling high level meeting on law and order after every three days and he himself was monitoring progress in recovery of abducted people.

He said that his government would form a judicial commission that would set punishment for police personnel who were found guilty of committing  violence on common people. He, however, expressed his satisfaction that police showed better performance in controlling crimes during last days.He said that a vigilance committee was monitoring the attendance of bureaucracy including deputy commissioners of every district at their offices on daily basis adding that would result in better governance in the province. He said that his government suspended deputy commissioner Washuk and two assistant commissioners for absence from duty.

Senior Minister and Pakistan Muslim League-N parliamentary leader, Sardar Sana Ullah Zehri said that we should encourage law enforcement agencies in maintenance of law and order instead criticizing them.Provincial Minister and Pashtoonkhawa Milli Awami Party parliamentary leader Abdul Rahim Ziaratwal said that accused arrested by law enforcement agencies should be produced before courts instead keeping them only in detention.

Opposition leader and Jamiat Ulema Islam-Fazl parliamentary leader Maulana Abdul Wasey said that presently, kidnappers and bandits in disguise of law enforcement agencies were kidnapping and looting common people. He demanded that no law enforcement agency should be allowed to raid any area without permission of assistant commissioner and Tehsildar concerned.PKMAP MPA, Hamid Achakzai said that drug mafia was taking extortion from people on Quetta-Chaman highway.Others who spoke include PML-N MPA Asim Kurd and Awami National Party MPA Eng. Zamarak Piralizai.Later, the chair adjourned the house for indefinite period. – APP