Tiger Woods’ girlfriend Lindsey Vonn says not to get married 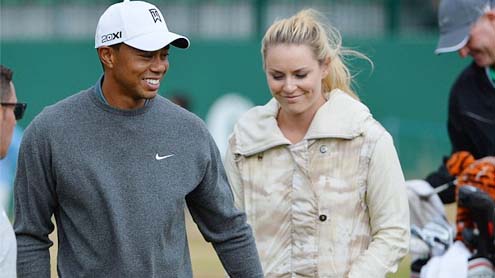 Tiger Woods' girlfriend Lindsey Vonn says not to get married

She divorced her first husband Thomas Vonn in 2011 after four years of marriage, while he endured a very public break-up with wife Elin Nodergren after cheating on her with over a dozen women.

Following the collapse of both of their relationships, sporting couple Tiger Woods and Lindsey Vonn announced that they were dating in a very bizarre Facebook post in March this year.till going strong in July, the pair appear to be a match made in heaven.But as their relationships becomes even more serious, Olympic downhill skier Vonn has revealed that she will NEVER marry again.The pretty 28-year-old blonde makes the revelation in a new interview with US Vogue in which she also poses for a glamorous photo shoot.

The super toned and currently very slim (she hasn’t been able to build up her muscles since a bad skiing accident in February this year) is snapped in a stunning black and white ball gown and black stilettos heels as she strikes a classic skiing pose.In the image, Lindsey is stunning, her long blonde hair cascading around her shoulders and a smouldering application of smokey eye make-up to her visage.Lindsey, who met current boyfriend Tiger at a charity event in 2012, says in her interview that she doesn’t regret her marriage to first husband and former coach Thomas Vonn, but hints that their break-up put her off the idea of walking down the aisle again.

‘I don’t talk to him (Thomas). Honestly, I wouldn’t take anything back,’ she explains. ‘It was good for me and I was happy for a period of time and I learned a lot about myself.’She explains that mixing a romantic life with their careers was the demise of her and Thomas’s marriage.’…to have business in the relationship is very difficult. It definitely did not work for me, and I would not recommend it. I would also not recommend getting married! I am definitely not getting married (again). To anyone.’Despite her reluctance to walk down the aisle in the future with current beau Woods, the couple’s relationship is going swimmingly, and as Lindsey recovers from her injury she has been acting as her boyfriend’s very own personal cheerleader.

She has regularly been seen on the pro-golf tour, being chauffeured around in golf carts and wearing pretty sundresses.Things are getting very serious between the pair, who have a lot in common with their high profile sporting careers.Lindsey says when the two initially met in 2012 at a charity event, they hit it off immediately.’We immediately clicked, you know? It was just one of those things,’ she explains.The pair started out as friends but their relationship soon turned romantic after the busy duo started corresponding via phone calls and texts.’We talked a lot, corresponded a lot, and he was a good friend who was always there. And then it became more,’ Lindsey explains. ‘It’s amazing. Life changes very quickly, in a very positive way, if you let it.’

When it comes to Tiger’s past indiscretions, Lindsey no doubt knew what she was in for.She says that she easily overcomes the media scrutiny by simply being ‘happy’ in her relationship with the famed golfer.’Tiger’s fame is obviously in the extreme, the amount of scrutiny that he’s constantly under,’ she says.’But that’s the thing: It all comes back to being happy. It doesn’t really matter what anyone else thinks; do what you love to do and be happy and that’s it.’Lindsey also touches on the notion of children in her interview whilst discussing her retirement age from skiing.’You can compete till about 34′, she tells Vogue. ‘Or even longer. But most women retire because they want to have kids. If you’re successful and your body’s holding up, you could keep going, but most women don’t.’But I don’t know: I said I’m going to ski through the 2015 world championships in Vail and then… asess the situation.’ – DailyMail