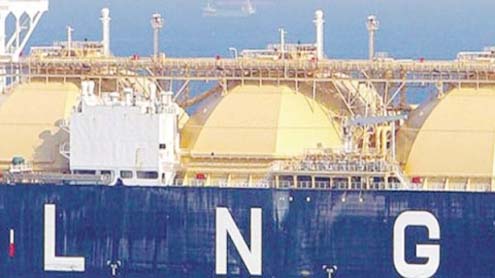 ISLAMABAD: The Economic Coordination Committee of the  Cabinet (ECC) here on Thursday approved three  projects for construction of terminals at Port Qasim for receiving, storage and regasification of Liquified Natural Gas (LNG).

The ECC meeting was presided by Federal Minister for Finamce Senator Muhammad Ishaq Dar.It approved Fast Track Engro Terminal Project, likely to be completed in 6 to 8 months at an estimated cost of $ 30-40 million, and having a capacity of 200 MMCFD modalities.  It would be finalized between the Secretary Finance and Secretary Petroleum. The ECC also decided to reaffirm its earlier approval for SSGC LPG Retrofit Project estimated to cost $ 175-200 million, having capacity of 500 MMCFD.

It agreed to launch process for a New LNG Terminal Project estimated to cost $ 200-250 million, having 500 to 1000 MMCFD capacity.Both the projects would be completed within 18 to 22 months and 26 to 30 months respectively.The ECC decided to constitute a committee under the chairmanship of  Federal Minister for Science and Technology, Zahid Hamid with Ms. Anusha Rehman, State Minister for Information and Technology, Chairman SECP, Deputy Governor State Bank, Secretary Economic Affairs Division to streamline registration and regulation of non-governmental organizations, international non-governmental organizations and put up a comprehensive report for the consideration of ECC within two months.

The chairman of the committee has also been authorized to co-opt any person that he may deem necessary for the purpose.While reviewing the report on implementation of the decisions taken by the ECC, the members of the ECC expressed satisfaction over the pace of implementation of its decisions.The ECC while reviewing key economic indicators was informed that the surge in the items included in the sensitive price index has been contained especially with respect to non-food items.The meeting expressed satisfaction over the present stock of sugar and was told that 100,000 tons have been released to cater to the requirements of the month of July as well as Ramazan.

As for the fuel position, there is presently a stock for 21 days as compared to 12 days in the corresponding period last year (2011-12).The meeting was informed that a healthy growth of 4.2% was recorded in large scale manufacturing sector as compared to 1.3% during the corresponding period last year (2011-12). The exports in 2012-13 total 24.52 billion dollars showing an increase of 3.78% while the imports hovered around 44.95 billion dollars.The remittances recorded a growth of 5.6% reaching a record 13.920 billion dollars in 2012-13. However, the revenue collection was only Rs 1882.7 billion showing a growth of only 3.1%.

The meeting was informed that the stock exchange index has reached a record 23160 points and market capitalization has nearly doubled.Ms. Anusha Rehman, State Minister for Information Technology proposed that the charts reflecting the performance of economy should include another column showing targets so that there is a realistic analysis of the performance of the economy.The proposal was approved by the ECC.The Chairman FBR, Tariq Bajwa informed the meeting that SRO zero rating GST on dairy, bicycle and stationery has been issued.

The meeting noted that the Ministry of Industries has floated two international tenders of 50,000 tons each for import of urea on emergency basis of which one will be opened on Monday.The ECC decided not to extend the expiry period for quotas of those parties who were unable to export sugar within the stipulated period. These quotas would now be awarded on first come first basis to applicants who would establish irrevocable letter of credit with a shipment date within 60 days.

Tiger Woods’ girlfriend Lindsey Vonn says not to get married