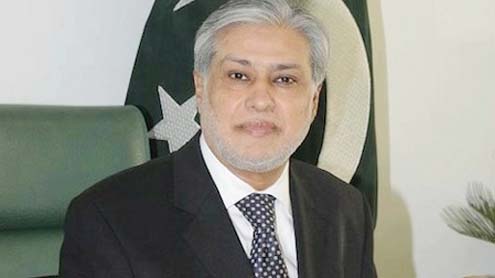 ISLAMABAD: The Ministry of Finance (MoF) has cleared Rs 480 billion circular debt out of Rs 503 billion and it has been decided to withhold the remaining amount of Rs 23 billion for necessary clearance until July 31, Finance Minister Ishaq Dar said on Monday.

Dr Emir said that there were tremendous business opportunities in Pakistan and Malaysia was willing to make investments in Pakistan and looking at Pakistan as a spring board for re-export to Central Asia and Africa.Recalling his meetings with former Malaysian prime minister Mahathir Mohamad, Dar praised the Malaysian leader for his vision for the Muslim world.He informed the Malaysian delegation that Prime Minister Nawaz Sharif would soon unfold an energy policy, envisaging additional power generation at affordable prices. The policy, he said, would address the present skewed energy mix which was at the core of the present energy crisis facing the country.

“We plan to double the power generation in the country in the next five years,” said the minister.Dar said that the circular debt, which had been adversely affecting energy production, has been virtually settled.“We have cleared Rs 480 billion to power producing entities and the balance of Rs 23 billion represents the claims pending settlement. A small amount would be however, withheld pending clearance.”

This measure, he said, had not only resulted in addition of 1,700MW in the national grid but also buoyed foreign investors who are now looking forward to make investments in the energy sector in Pakistan.Dar said that the conclusion of a programme with IMF has sent very positive signals to the financial world which has welcomed the measures taken by the government of Prime Minister Nawaz Sharif for stabilising the economy and creating an investor-friendly climate.This IMF programme, the minister said, would provide comfort to the investors and enhance their confidence in the economy of Pakistan. – DailyTimes