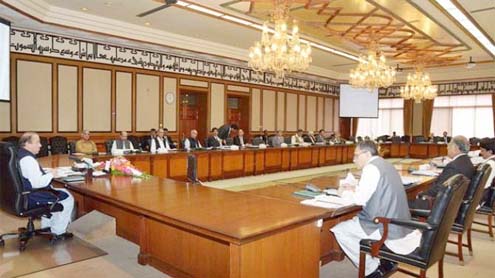 ISLAMABAD: Prime Minister Nawaz Sharif on Tuesday said his government plans to completely end loadshedding of electricity within three to four years through a multi-pronged strategy.

The strategy will include low cost energy, tariff restructuring, efficient technology transparency and merit-based system, the Prime Minister said while chairing the 23rd meeting of Council of Common Interest (CCI) here at the Prime Minister Office.The Prime Minister said low cost energy would be produced by using coal and hydel power for power generation. The extraction of coal and development of the infrastructure for power production will be carried out simultaneously to save time.He said coal will be imported till it is available locally for power consumption.

He said run of the river projects were being initiated to overcome short term demands while large dams including Bunji dam and Bhasha dam would be constructed over a period of time to overcome irrigation needs and power shortage.All provincial Chief Ministers appreciated the energy policy presented by the government, however requested the Council for time to have a detailed analysis of the policy to further improve it within their spheres. Prime Minister Nawaz Sharif directed to form a committee comprising the Chief Secretaries of four provinces besides one nominee from each province and submit their report within a week.

He said the power strategy foresees bringing down the power tariff to single digit in three years.The tariff restructuring is main feature of the new energy policy through which subsidies will be gradually rationalized. The 200 units’ consumers will be provided subsidies.The Prime Minister said the mismanagement and inefficiency of WAPDA and other concerned departments was responsible for this situation.“It is their responsibility that we are facing this situation today. They have miserably failed to maintain the system and today our distribution lines cannot bear the burden,” he said.

The Prime Minister said 1400 megawatts electricity can be brought into the system within one year through proper maintenance of the system.He said the government had to take lead in power projects implementation strategy.He announced construction of Gaddani Energy Corridor which would provide services to investors for energy production. It will be a hub of electricity generation, the Prime Minister added.Prime Minister Sharif said the power issue needed a policy which encompasses all dimensions and also needs a strong will by the federal government as well as the federating units to make it successful.

“The role of provinces is crucial in making the policy a success”, he added.The Prime Minister said that major problems being faced by the power sector are demand-supply gap, lack of affordability, inefficiency, and pilferage and power theft.He said that major changes would be brought in the system to overcome these issues. He added the country was producing 45 percent of electricity with furnace oil, which was too expensive for power generation and had led to higher tariffs.

The distribution losses which accounts for 25-28 percent and theft of electricity amounting to Rs. 140 billion per annum are major cause of the shortfall, he added.The Prime Minister said the implementation of the policy would not be an individual effort but a collective endeavor to overcome power shortage and in this regard the input of the provincial governments will be very important.