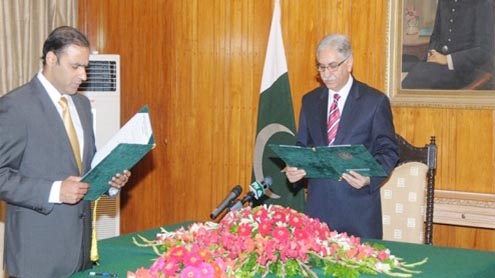 The oath-taking ceremony at the Aiwan-e-Sadr was attended by Speaker National Assembly Sardar Ayaz Sadiq, Federal Minister for Water and Power, Khawaja Muhammad Asif and other high officials. Abid Sher Ali is likely to be given the portfolio of Minister of State for Water and Power. Talking to APP after taking oath, Abid Sher Ali said a crackdown on power pilferers would be launched soon. He said strict laws would be enforced including non-bailable arrest of culprits and deprivation of electricity connection for a year.

Abid Sher Ali said power theft was incurring huge loss worth billions of rupees to the national economy. He said cut down of line losses, improvement of power transmission lines and recovery of money from electricity bills was a big challenge.He said the government would ensure transparency in the power distribution system.He said the new energy policy would be announced with consensus which would make ‘a brighter Pakistan’ in accordance with the vision of Prime Minister Nawaz Sharif.The new Minister of State expressed hope that the energy crisis would be overcome in three years, which he said would bring a positive impact on economy. – APP