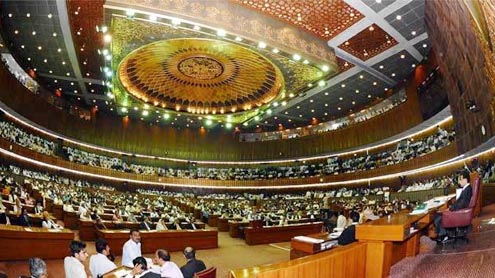 ISLAMABAD: The National Assembly and Senate will likely abound with anger when the two houses meet on Monday (today), a day before they and four provincial assemblies elect the country’s next president in a vote made controversial by a mix of political and judicial moves.

The main opposition Pakistan Peoples Party (PPP) has made it known it would make what could be its loudest noise in both houses after the May 11 general elections to protest against a Supreme Court-ordered change of the presidential election’s schedule on the demand of the ruling Pakistan Muslim League-N (PML-N) that provoked a boycott of the Tuesday vote by the previously ruling PPP and some of its allies.

While the 342-seat National Assembly is likely to see opposition leader Khurshid Ahmed Shah lead a political assault, the opposition leader in the 104-seat Senate, Chaudhry Aitzaz Ahsan, and possibly Senator Raza Rabbani, who has withdrawn his candidature from the presidential race, are expected to question the change of schedule on legal grounds as well.

PML-N candidate Mamnoon Hussain, a Karachi businessman, would have, in any case, won the majority of the 706-member electoral college of the two houses of parliament and the provincial assemblies of the Punjab, Sindh, Khyber Pakhtunkhwa and Balochistan, to occupy the presidency when the PPP’s incumbent President Asif Ali Zardari vacates it on completing his five-year term on September 8.

Yet the PML-N went to the Supreme Court through its chairman, Senator Raja Zafarul Haq, seeking to bring forward the polling date to July 30 from the earlier date of August 6 after the Election Commission had rejected a similar request.

And a three-judge bench, headed by Chief Justice Iftikhar Muhammad Chaudhry, did just that in a single hearing on Wednesday without hearing other parties on the petitioner’s controversial religious grounds that August 6 would be too close to Eidul Fitr and many parliamentarians at the time were likely to be engaged in non-obligatory Umra pilgrimage to Saudi Arabia or confined to mosques for ‘aitkaf’ prayers in seclusion.

While the PPP, the largest opposition party in parliament that governs Sindh province, announced a boycott of the election the next day on grounds of not being heard by the court and that the new schedule left little time for its candidate to campaign in the provinces, some unexpected happenings in the aftermath included a Pakistan Tehreek-i-Insaf decision — that won some PML-N praise — to keep its candidate, former Supreme Court judge Wajihuddin Ahmed, in the run after some earlier hints of a boycott.

Though the PML-N already has in its coalition some one-time PPP allies like Jamiat Ulema-i-Islam and Pakistan Muslim League-Functional (PML-F), it found its strangest bedfellows in the opposition Muttahida Qaumi Movement (MQM), which announced its unconditional support for the PML-N candidate on Friday.PPP’s Khurshid Shah — if he is able to make it to Monday’s session after the funeral of a sister who died in Sukkur on Sunday — has vowed to “congratulate” Prime Minister Nawaz Sharif for joining hands with the MQM although a declaration signed by the PML-N and several other parties at 2008 a conference in London called the Karachi-based party terrorist with whom none of them would make a coalition.After the expected fireworks on Monday, when both houses have been summoned to meet at 4pm, the next day’s vote at a joint sitting at the parliament house as well as those of the provincial assemblies will likely be a smooth affair as the boycotting PPP and its allies will keep away.

The National Assembly’s agenda for Monday includes a motion to be moved by Minister of State for Parliamentary Affairs Shaikh Aftab Ahmed for a voice vote to allow the use of the lower house chamber for polling for the presidential election, which is likely to be chaired by Chief Election Commissioner Fakhruddin G. Ebrahim or a nominee. The provincial assemblies, which will have equal votes not exceeding 65 of the smallest strength of Balochistan Assembly, will cast their votes at their respective chambers.

Apparently to guard against some reported cases of a violation of a constitutional requirement of a secret ballot in the last presidential election in 2008, the Election Commission issued directive asking the presiding officers for Tuesday’s vote to ensure the secrecy of the ballot and barring members of parliament and provincial assemblies from carrying mobile phones or any other electronic device that can be used to take pictures. – Dawn