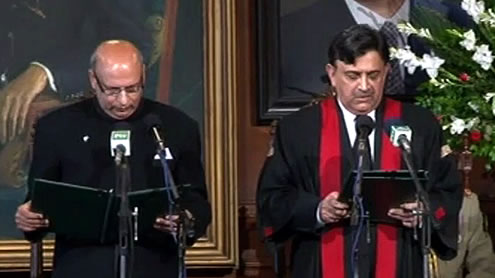 Sarwar while talking to media persons, expressed his agenda as a new governor of the province, saying he would like to take all political parties along with him to resolve provincial crisis and to promote better image of the country across the world. He stressed on improving literacy rate and said it was a need of the hour to impose education emergency poverty and other crisis needs to be eradicated from Pakistan.

Sarwar confirmed that foreign investments were negligible in Pakistan due to reasons of lawlessness and terrorism so this situation should be improved and pledged he would use his all abilities to do so. The governor said he had come Pakistan leaving 35 years old companionship in England behind him because his all sorrows as well as joys were linked to his homeland.

Sarwar said he would like to work for provision of health and education to masses as he had done being a member of parliament in UK. “All the issues facing Pakistan are due to low literacy, poverty, unemployment, load shedding and terrorism so there is a need of collective effort against these issues. He said he would make all his efforts and use personal connections at international level to spread education in Pakistan.

He was of the view that lawlessness and terrorism were two main reasons of low foreign investments. He expressed hope that Pakistan Army, intelligence agencies and nation would defeat the terrorist mind-set in Pakistan. To a query, he said that Shahbaz Sharif was chief executive of the province and he would coordinate with the governor on all issues.

Sarwar also expressed his gratitude to Nawaz Sharif for appointing him as Punjab governor, adding that the PM had a pain for the country and the masses. – Dailytimes