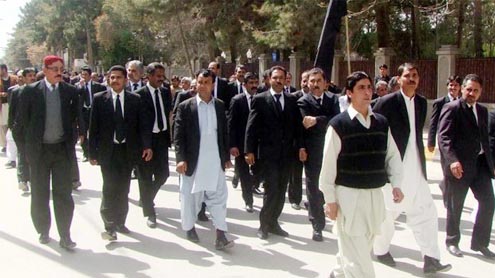 QUETTA: Leaders of different lawyer organisations have announced their decision to boycott proceedings of the Supreme Court and subordinate courts in Balochistan from Aug 15 in protest against selection of three additional judges for the Balochistan High Court without consultation with the legal community.

The announcement was made the other day at a press conference which was jointly addressed by President of the Balochistan High Court Bar Association Zahoor Ahmed Shahwani, leader of the Pakistan Bar Council Munir Kakar, Abdullah Kakar of the Supreme Court Bar Association and Hazoor Bakhsh, a leader of the Baloch Lawyer Action They said the lawyer organisations were not taken into confidence on the issue of judges’ appointment in the Balochistan High Court.

They said the lawyers selected for appointment as judges of the Balochistan High Court were not eligible for the post. They said the lawyers’ representatives had expressed their reservation by informing the Judicial Council and Supreme Court Bar Association regarding selection of judges for BHC.They said that despite strong objections the concerned authorities did not take any notice of the situation and lawyers were compelled to launch a protest drive against the decision.

Lawyer organisations, they added, would boycott court proceedings from August 15 which would continue during the presence of Chief Justice Iftikhar Muhammad Chaudhry in the Quetta registry.“No lawyer will appear before the Supreme Court and subordinate courts,” they said. They also demanded of the parliamentary committee not to approve the appointment of these three judges. – Dawn