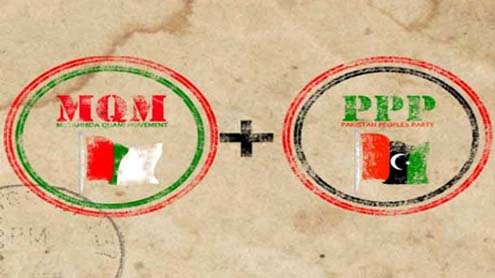 KARACHI: Both the major political parties in Sindh, Pakistan People’s Party (PPP) and Muttahida Qaumi Movement (MQM), have miserably failed in reaching a consensus over new local government system in the province as they stick rigidly to their respective stances.

MQM members did not agree to the proposed draft, considering it not suitable to their stance. They reiterated their demand to enforce Sindh People’s Local Government Order (SPLGO), 2012 after necessary changes. The MQM leaders said that their party wants to see local government empowered in light with Article 140-A of the Constitution.The PPP, however, wants to enforce 1979’s LG system with necessary amendments. “1979 LG system will be enforced in the province. We will make it better by bringing necessary amendments in the law”, said Khuhro.

Talking to the media after the meeting, Khuhro said that people of  Sindh have serious reservations on the SPLGO, 2012 and it was the reason that PPP’s previous government withdrew it. Besides, he added, the provincial government has very short time to finalise a new LG system to meet the Supreme Court’s deadline, therefore bringing improvements in 79’s LG System was the best option in the current circumstances.Responding to a question the senior minister supported continuation of five districts in Karachi, saying more districts in Karachi can be created in line with other parts of the province. Final round of the PPP and MQM discussions will be held on August 17.

Shahi Syed told journalists that his party was supports the continuation of 1979 LG System. He said that necessary changes can be brought into the law; however, no system can be accepted for Karachi that is different from other parts of the province.Speaking at a press conference SUP Chief Syed Jalal Mahmood Shah said that his party agrees with 70 percent of the points in the proposed draft. However, he added, they will share recommendations regarding the remaining points, on which there are reservations.Sharjeel Memon said in a statement that the decision regarding the system will be settled with mutual consultation, which will be in the interest of Sindh and the people.

He said that new LG system will be prepared in light of the local bodies system of 1979. However, he added, some amendments have been proposed that are aimed at updating and bringing the law in accordance to the current scenario. The World Bank has also appreciated the local bodies system 1979, he added.He hoped that all political parties will accept the new local bodies system. Political ego should not hinder provision of benefit to the masses, he said, adding that new local.bodies system would help reduce gap between urban and rural population. He admitted that the LG system brought in the past was against the wishes of the people. – DailyTimes