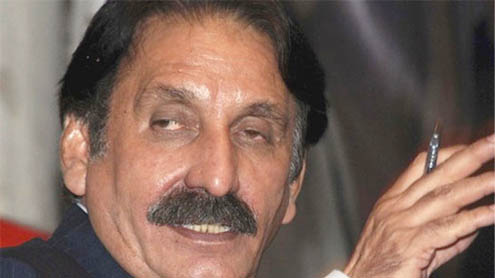 KARACHI: Pakistan’s top judge said Thursday that weapons in large quantities were being smuggled in through the Karachi port and supplied throughout the country, including Balochistan.

Citing media reports, he said around 19,000 containers carrying weapons for Nato and US forces fighting in neighbouring Afghanistan had gone missing.Chief Justice Iftikhar Muhammad Chaudhry, who headed a five-member Supreme Court bench, came down heavily on the chief secretary Sindh and provincial police chief, saying both were not realising their responsibilities to ensure protection of lives and property of citizens.

The bench, with Justice Jawad S. Khawaja, Justice Gulzar Ahmed, Justice Athar Saeed and Justice Sheikh Azmat Saeed as its members, was hearing the Karachi law and order suo motu implementation case at the apex court’s Karachi registry.Expressing dissatisfaction with the reports submitted to the court by IG Sindh Police and the chief secretary over the missing Nato containers, the court summoned chief collector Customs to the hearing on Friday.

Questioning competence of the police, the court asked why CPLC was successful in catching culprits of kidnapping and murder cases, while the police was still unable to come up with anything substantial.The bench was astounded with the advocate general Sindh’s statement in which he declared Karachi a ‘war zone’. CJ Chaudhry wondered why the advocate general of Balochistan had not given a similar report when worse cases had taken place in that province.

Meanwhile, Attorney General of Pakistan Munir A. Malik also submitted a report before the court, stating that the major reason for worsening law and order situation was the ‘growing population’ in the port city.He also stated that drug cartels, weapons smugglers and gangs operating in the city had become a norm.The federal government’s report further stated that any major operation in Lyari should be avoided. It also advised on banning pillion riding, while cautioning against shutting down cellular networks without prior coordination.

The report also revealed presence of a militant group namely “Muhajir Republican Army” in Karachi and recommended legal course of action upon identification of its members.The court was also told that any mobile phone SIM card which could not be verified by September 15 would be permanently blocked.The chief justice remarked that there was an ongoing turf war between different groups in the city and the federal government had not given any input to the provincial government during last two years to normalise the situation.The bench directed the attorney general and advocate general of Sindh to seek instructions from federal and provincial governments to ensure protection of citizens’ lives.The bench will take up the case again on Friday, Aug 30 at the Karachi registry.

Why do we still fool ourselves that Britain is a great power?