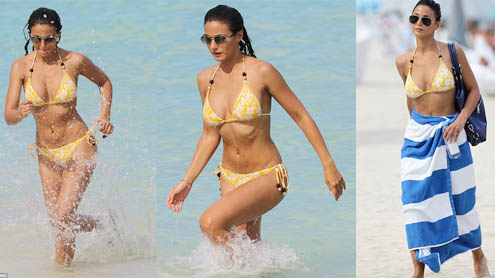 Actresses are used to having all eyes on them.And Emmanuelle Chriqui certainly drew plenty of admiring glances as she showed off her fabulous figure while relaxing on Miami Beach on Thursday.

The 35-year-old, who memorably played Eric’s love interest Sloan in the hit Hollywood show Entourage, wowed as she ran through the surf wearing a tiny yellow and white string bikini.The beautiful brunette wore her hair down, shading her eyes from the harsh glare of the sun with brown-tinted aviator sunglasses.Not one content simply to pose on the sand, she cooled off in the azure waters, washing away any trace of make-up and getting her hair thoroughly soaked.

Showing off her sun kissed skin, the TV star seemed to be avoiding tan lines where possible, by going without any jewellery.The Mentalist actress was accompanied on her vacation by her chiselled beau, Adrian Bellani.The bearded actor, who is best known for his role as Miguel Lopez-Fitzgerald on the NBC daytime drama Passions, showed off his fabulous physique and washboard abs in a pair of blue swimming trunks.The loved-up duo spent a good deal of time relaxing in waves, sharing a romantic embrace as they enjoyed the cool water. When she wasn’t splashing about in the ocean, Emmanuelle lounged in the shade – probably protecting her skin from the sun to keep it flawless for the cameras.

And when it came to home time, the pretty actress took charge – packing the couple’s belongings into an enourmous blue leather beach bag.Leaving the beach, she wrapped herself in a big blue and white beach towel, grabbed a bottle of water to stay hydrated and took home her most envy-inducing possession, Adrian.The summer break will come as a welcome relief to the actress, who has shot three films this year, including TV movie The Ordained, which centers around a man who leaves the priesthood and becomes a lawyer to prevent his politician sister from being assassinated.

During an interview for GQ in January 2012, producer Mark Wahlberg confirmed that an Entourage film was in the pipeline.’I think a 90-minute movie of sheer craziness—the guys getting back to just being about the guys, you know?’ Wahlberg said. ‘Lose the ladies. Go crazy. Give people what they want.’Luckily for Emannuelle and her fans, Wahlberg isn’t losing all the ladies and she will reprise her role as Sloan when the filming begnis in October. – DailyMail