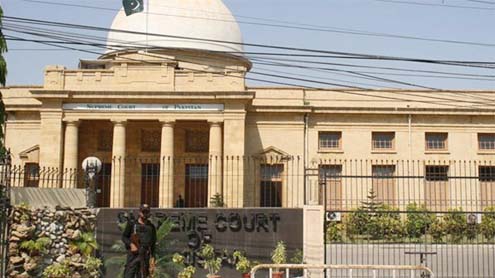 KARACHI: The Director General of the Sindh Rangers Maj-Gen Rizwan Akhtar on Friday informed the Supreme Court that around 19,000 shipping containers containing weapons and vehicles had gone missing during the tenure of the former minister for ports and shipping.

A five-member bench of the apex court headed by Chief Justice Iftikhar Mohammad Chaudhry, and comprising of Justices Jawwad S. Khawaja, Gulzar Ahmed, Athar Saeed and Azmat Saeed, was hearing the implementation of its judgment in the Karachi law and order case.The chief justice directed authorities to submit a report on the illegal smuggling and theft of duty at Karachi’s seaports within the next seven days.The chief justice also formed a one-member commission, comprising former Curtoms Collector Ramzan Bhatti, and ordered the Federal Bureau of Revenue (FBR) to fully cooperate with the commission in investigating smuggling activities at the ports.

The court also ordered Nadra to complete its task of weapons registration in the shortest possible time.Friday’s hearing – the third consecutive hearing of the case held at the Karachi registry –was attended by top government officials including the Inspector General Sindh, Additional IG, three Zonal IGs, DG Rangers Sindh Rizwan Akhtar and the Chief Secretary, along with other top official of the Sindh government.During the previous day’s proceedings, the chief justice had noted that a large quantity of arms and ammunition were being smuggled into Karachi through ports and supplied throughout the country.

He had also pointed towards reports of about 19,000 containers containing weapons and vehicles that had gone missing, and had asked DG Rangers Rizwan Akhtar to submit further details on the disappearance.Presenting his report, Akhtar informed the bench today that the matter of the missing containers was now a few years old and that they had disappeared during the tenure of the former minister for ports and shipping.Akhtar said that the weapons were taken to the tribal areas and then brought back to the port city. He said that National and Super highways and Hub routes were used in their transportation.

He informed the bench that there were ‘hundreds of routes’ between Sindh and Balochistan where there were several security check-posts but no law enforcement personnel to man them.The DG Rangers said that illegally smuggled weapons previously of the US military troops in Afghanistan were also recovered in Waziristan when he was serving in the restive tribal region.The DG Rangers also told the court that 78 per cent of the illegal weapons being used in Karachi were foreign-manufactured. He said these included AK-47s and 9mm guns, which were mainly used in murder crimes in the city.

Akhtar also pointed to the lack of proper monitoring at the ports. He said that there was need for scanners as properly scanning thousands of containers was a very difficult task.The bench had also summoned the Chief Secretary to the court.When asked how many CCTV cameras were presently installed in the city, the Chief Secretary told the bench that 1200 cameras were currently placed in different parts of Karachi.However, of these, a majority were in need of repair while the rest have been put up in such a way that they are unable to show any clear footage of the area.

Regarding the difficulties of effectively implementing security in Karachi, the CJ ordered that the proper installation of CCTV cameras in different parts of the city be completed as soon as possible.After being assured by the Sindh and Federal government, the bench adjourned proceedings until September 18, ordering the Advocate General and the Attorney General to submit their progress reports at the next hearing. – Dawn