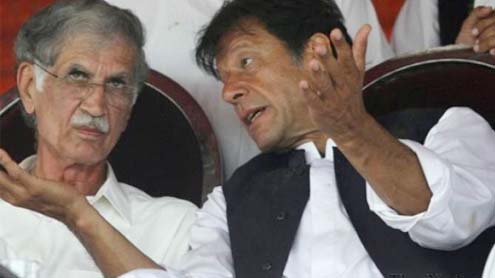 PESHAWAR: Though the deadline given by Khyber Pakhtunkhwa Chief Minister Pervez Khattak to eliminate corruption, ensure good governance system and speedy justice to people of the province in 90 days expired on August 31, there is nothing on ground to show that any of these targets has been achieved.

On May 31, in his maiden address to the provincial assembly, the chief minister claimed the people would see a real change for which they would have not to wait for months. “Gone are the days when there were rosy speeches but no practical steps,” he had said.The deadline of 90 days had been set by the PTI itself, not by the people, to root out corruption and solve other major problems. It was for this reason that in the May 11 polls, KPK people voted for PTI. It was a vote for change, a change to minimise their problems, provide to them jobs and security, end corruption and lawlessness.

However, in background interviews, people said they had pinned high hopes on the PTI government, while 90 days were not enough for brining a revolution in each sector. The dirt of over 60 years cannot be cleansed in just 90 days. Political observers said: “If there is a will, there is surely a way. We have so far seen just claims as there is nothing new. Neither corruption stopped, nor was justice ensured.”

Disappointed by the provincial government’s 90-day performance, some of them said three months are enough for making a little improvement. Corruption is on in police, revenue and excise and taxation departments working under the government’s nose. Moreover, 90 days are sufficient even to give a direction to directionless traffic system. All is well in government books, but facts are something else.

The government officials are not doing their jobs without receiving illegal gratifications. People are not getting speedy justice despite the fact that the PTI government has been claiming it has zero tolerance for corruption.To implement the PTI reforms’ agenda within 90 days, the government had instructed all commissioners, deputy commissioners, secretaries, assistant commissioners and police officials to take effective steps for eradication of corruption and culture of commission by August 31. But, no change is visible. No disciplinary action has so far been taken against officials for their involvement in corruption.

The question arises if everything is alright. On routine basis, transfers and postings of government officials of personal liking and disliking are taking place. Moreover, PTI had claimed it would end corruption within 90 days. Could they end corruption in KPK in 90 days? It has so far proved just a slogan as there is corruption in each and every sector.The deadline expired on Sunday and there is nothing admirable or even visible on ground to give its credit to the provincial government. The PTI government is functioning under the sharpest watch of the media on one side, while on other; the electorates are eagerly waiting for the change in terms of reforms in every sphere of governance.

PTI Chairman Imran Khan had also promised a change in the province. Now his party is in power to meet the promise as people of KPK had risen to Khan’s call.It is suggested that the PTI government should first understand and rationalise the existing problems and then formulate and implement feasible solutions to them.There is no change in the existing justice system.

The KPK government plans to introduce accountability act, but it has so far proved just a claim. Talking to this scribe, the people said there has been nothing on ground so far to praise PTI for that. In a statement, KPK CM’s Media Coordinator Sheraz Piracha has said only those government officials who are not performing their official duties honestly, efficiently and with professionalism are scared of the deadline of August 31.

“After the deadline of August 31, people will come to know about the priorities and measures of the provincial government; and this deadline would be a starting point for a positive change in the province. He said there would be no room for those who do not respect the people and believe in their exploitation instead of serving them. On the completion of 90 days’ period, CM Pervez Khattak, while speaking to media persons, said: “His government is introducing reforms in various departments to facilitate the masses.

CM vows to act against extortion at check posts