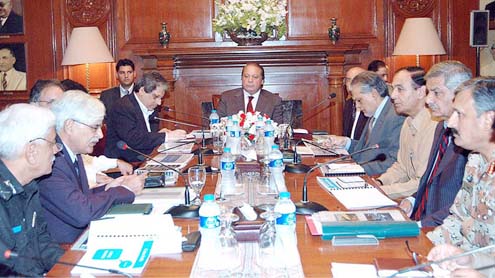 The DG Rangers also apprised the prime minister about ‘indirect political pressures’ on the paramilitary force preventing it from realising their responsibilities fully. He also indicated presence of criminal elements among the political parties’ ranks in the port city. Some of these criminals were involved in activities ranging from street crime to murders, he added.

The premier arrived in the provincial capital earlier this morning, a day before he was scheduled to preside over the federal cabinet session on the port city’s deteriorating law and order situation. The crucial session on Wednesday is expected to decide on a planned targeted operation against criminal gangs and armed militias of political groups, whose deadly turf war has ruined peace in the country’s economic hub.Sharif also held a meeting with representatives of all major political parties after arriving in Karachi, including the Pakistan People’s Party (PPP), Muttahida Qaumi Movement (MQM), Jamaat-i-Islami, Sunni Tehrik and Jamiat Ulema-i-Islam-Fazl (JUI-F).

Upon the premier’s query regarding lack of coordination between Rangers and police, Maj-Gen Akhtar said criminals manage to escape from the raided site whenever Rangers share intelligence reports with police. He also said that women and children block roads in protest against the targeted operations in different areas of the city preventing them from carrying out raids with optimum level of success.Apprising the PM on police performance, IG Sindh Police Shahid Nadeem Baloch said that 105 police personnel have been killed during the current year in different incidents of violence in Karachi.

He said 96 people have been killed in sectarian violence while 125 workers of different political parties have lost their lives this year so far. Around 80 extortionists and 50 activists belonging to banned and Jihadi outfits have been arrested by the police, he added.Meanwhile, speaking to trader community of Karachi, Prime Minister Sharif vowed for every possible effort in restoring peace in the city. He also expressed the optimism that Karachi would soon turn into the “city of lights” again.“Extraordinary circumstances require extraordinary steps for bringing back tranquility in Karachi,” he said adding the federal government was ready for rendering all possible assistance to the Rangers in that regard. – Dawn

Federal Cabinet for strict, across the board targeted action in Karachi