Zardari back into public 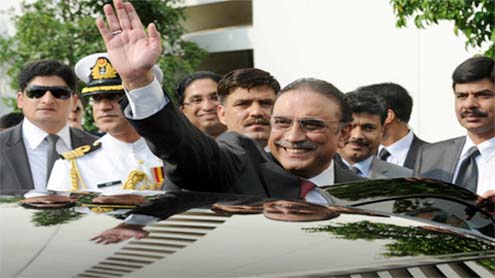 Zardari back into public

LAHORE/ISLAMABAD: President Asif Ali Zardari stepped down on Sunday, leaving his official residence after a record five years in power overshadowed by worsening security and a weakening economy.

The 58-year-old widower of former prime minister Benazir Bhutto was treated to an honour guard from the armed forces and shook hands with staff before leaving the plush presidential palace. He was driven away in a black luxury saloon car from the sprawling residence at the foot of the lush green Margalla Hills. Never popular and always shrouded in controversy, Zardari – once jailed for 11 years for alleged corruption – is now likely to split his time between Pakistan and Dubai.

He retires six years after his wife’s murder, having presided over the only civilian government in Pakistan to complete a full term in office and hand over to another at the ballot box. His successor Mamnoon Hussain is to be sworn in today (Monday). Zardari is going to Lahore, hoping to open a new era for his Pakistan People’s Party (PPP), which suffered a humiliating electoral defeat to the Pakistan Muslim League-N (PML-N) in May. Aides deny that Zardari, unpopular and divisive within the PPP, will spend most of his time abroad and insist he will concentrate on trying to revive the centre-left party. The PPP ran a rudderless general election campaign and has been thrust into its greatest crisis, suffering a crushing electoral defeat without a Bhutto at its helm.

Zardari said in an interview broadcast on Saturday that he would not run as prime minister in future and would instead re-organise the party by shuttling around the country. Zardari has earned a rare distinction of being the only democratically elected president in the 66-year-long history of Pakistan to have completed a full five-year constitutional tenure.

The activities of Zardari as the head of state formally came to an end following the ceremony of farewell guard of honour by the smartly turned out contingent of the armed forces in the Presidency. He will today (Monday) attend the oath-taking ceremony, as former president, of the newly elected president, Mamnoon Hussain. This will also be another fresh addition in the political and democratic history of the country.

Zardari on Sunday reached Lahore airport from Islamabad where Punjab Minister for Agriculture Dr Farukh Javeed gave him a reception on behalf of the provincial government of the PML-N. Later, he left for Bilawal House in Bahria Town by a helicopter where his party workers welcomed him with slogans of “Jeay Bhutto” and “Welcome Zardari”. PPP arranged a special ceremony in honour to its co-chairman in which around two thousand party workers and leaders, including Aitzaz Ahsan, Latif Khosa, Rehman Malik, Raja Pervez Ashraf, Jahangir Badr, Farooq Naik, Qamar Zaman Kaira, and Samina Ghurki.

Addressing the party workers, Zardari said parliament and democracy had been strengthened and women empowered during his presidential term and now they would go ahead in the same way. He assured Prime Minister Nawaz Sharif that the PPP would fully support him against all anti-democracy forces that believe in “politics of guns”.He said that he had promised Nawaz Sharif that his party would stand by him against the enemies of Pakistan. Zardari said that some international forces wanted to upset the situation in Pakistan and “his party’s mandate was snatched in the general elections”, but they accepted it for the sake of strengthening democracy.

Zardari said that his party was not defeated in the war (of democracy) and looking ahead to the next elections. He was sure about a comeback of his party and said that they had set new trends in politics. According to party sources, Zardari is likely to travel back to Islamabad today (Monday) to participate in the oath-taking ceremony of the new president. Later, he will return to Lahore to hold party meetings. – DailyTimes

Screams of joy in Tokyo as city awarded 2020 Olympics

Screams of joy in Tokyo as city awarded 2020 Olympics