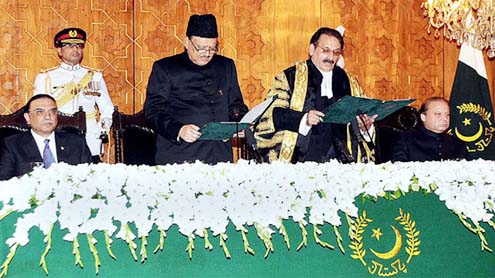 ISLAMABAD: Mamnoon Hussain Monday took oath of the office as country’s 12th Head of State for the next five years.Chief Justice Iftikhar Muhammad Chaudhry administered oath to the new President at a ceremony held here at the Aiwan-e-Sadr.

The event earned the rare distinction in country’s history as outgoing President Zardari attended the ceremony for the induction of the new President, signifying the deep roots democracy has attained in the country over the years.Instead of the usual two chairs, the dias this time had four; for Prime Minister Muhammad Nawaz Sharif, outgoing President Asif Ali Zardari, Chief Justice Iftikhar Muhammad Chaudhry and the new President Mamnoon Hussain.The jam packed event was attended by members of the federal cabinet, governors, chief ministers, former prime ministers, judges, the Services Chiefs, diplomats and senior officials.

The ceremony began with the sound of the trumpets marking the arrival of the chief guest. The jam packed Darbar Hall resounded with applause as soon as President Zardari entered the hall. He was followed by Prime Minister Sharif, Chief Justice Chaudhry and Mamnoon Hussain.Chief Justice Chaudhry administered oath in Urdu to Mamnoon Hussain, 73, who was attired in black sherwani and Jinnah cap, and who earned the distinction of being the second democratically elected President. The text of the order to be printed in the “Gazette of Pakistan” was also read out.

National anthem was played at the beginning and end of the ceremony. Zardari warmly shook hands with the new President and Prime Minister and felicitated them.As huge portraits of Quaid e Azam and Allama Iqbal seemingly witnessed the graceful ceremony, the two large black and white portraits of Zulfikar Ali Bhutto and Benazir Bhutto were no more there, leaving behind a dull shade on the empty wall.The portraits on the walls outside the entrance to the grand hall were also shuffled to make room for its new occupant.Later the guests greeted the newly sworn in President and wished him well on assuming national responsibilities.

Mamnoon Hussain, a PML-N candidate, won the Presidential polls held on July 30 by an electoral college comprising members of the Parliament, the Senate and the four provincial assemblies. He defeated Justice (Retd) Wajiuddin Ahmed of PTI, as the PPP boycotted the Presidential poll.A graduate of the prestigious Institute of Business Administration, Karachi, Hussain was born in 1940 in Agra, India and his family migrated to Pakistan in 1947 at the time of partition.He also served as Governor Sindh from June to October 1999, till he was ousted along with the PML-N government of Prime Minister Nawaz Sharif, by the then army chief General Pervez Musharraf.