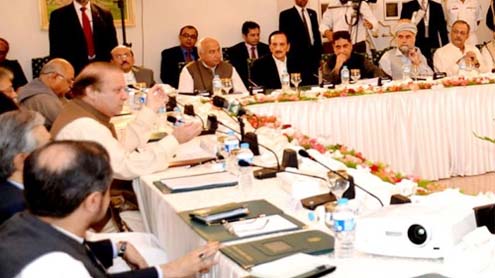 ISLAMABAD:  In a shift in the country’s security strategy, the top civil-military leadership – united and consolidated – decided to hold peace talks with all militant groups, reportedly keeping the Tehreek-e-Taliban Pakistan (TTP) on top priority.

The decision to initiate a dialogue process with ‘all stakeholders’ and endorse action against groups who refuse to take part in the peace talks was approved on Monday at the All Parties Conference.Prime Minister Nawaz Sharif chaired a marathon meeting lasting six-hours – convened by the government to demonstrate national unity and reach consensus on the country’s security strategy – which was attended by Pakistan’s political and military leadership.

In an unprecedented move, the country’s military institutions have thrown their weight behind the government’s bid to initiate the dialogue with the outlawed TTP. However, it did caution that the authorities need to tread carefully as there are elements within the umbrella organisation that may never reconcile.In a detailed briefing at the APC, Army Chief General Ashfaq Parvez Kayani insisted that the military and the government were ‘on the same page’ on the issue of reaching out to the militants.

“The army will follow whatever decision the government takes,” Kayani was quoted as saying.The conference was organised to devise a national policy against terrorism and to reach a consensus on the option of initiating dialogue with the militant groups at the first stage of the peace process.Acknowledging in his opening remarks that Pakistan was in the grip of terrorists, Prime Minister Nawaz urged leaders of political groups not to politicise the issue. Emphasising the importance of taking the decision in a democratic manner, he said that people’s trust in democracy will be strengthened if this government succeeds in tackling terrorism through consensus.

On the security front, Inter-Services Intelligence (ISI) Director-General Lt General Zaheerul Islam informed political leaders that there were differences within the TTP on the issue of accepting the olive branch offered by the government, officials told The Express Tribune.The infighting within the militant group intensified after one of their commanders, Asmatullah Muavia, supported talks with the government. However, TTP chief Hakimullah Mehsud expelled him and since then he was on the run.

The ISI chief said that identifying the ‘reconcilable militants’ would be key in taking the peace process to its logical and favourable end. “But there are groups within the TTP who are in favour of talks but then there are others that enjoy the backing of certain hostile agencies who may never agree,” he warned.Sources said the government’s strategy would focus on isolating such elements so that a justification should be provided for a targeted operation against hardcore groups in the future.

General Kayani said that there was no secret understanding with the US on the CIA-led drone campaign. He said it was up to the government to take appropriate action to persuade the US to halt such strikes and assured the leaders of the army’s support. It was agreed that the strikes violated Pakistan’s sovereignty.The APC concluded after adopting a joint communiqué calling to initiate a result-oriented and peaceful dialogue process to eliminate extremism from the country.All the participants, representing the mainstream political parties, signed the joint communiqué at the conclusion of the conference.

A solemn but determined resolve

Political leaders admitted in the unanimously approved resolution that “the situation has continued to deteriorate over the last several years and past efforts to control terrorist and extremist elements have not yielded the desired results.”However, the participants expressed their resolve that there will be no compromise on Pakistan sovereignty and integrity.

According to the communiqué, it was agreed that the cooperation of religious-political parties would be sought to facilitate talks with various groups. However, in decision that reflects a carrot-and-stick policy, action would be taken against groups that refused to be part of the peace process.Calling attention to terrorism-hit provinces, it was decided that another APC will be called to resolve the issues facing Balochistan and the Khyber-Pakhtunkhwa.

Meanwhile, the Khyber-Pakhtunkhwa government will oversee the state of affairs in the volatile Fata region.Terming the drone attacks an ‘illegal and immoral’ act, the APC communiqué said: “We declare that we shall ourselves determine the means and mode of fighting this war in our national interest and shall not be guided by the United States of America or any other country in this regard.”The resolution called upon the federal and provincial governments to provide all possible assistance for the rehabilitation and social reintegration of the victims and families affected by terrorism, including the internally displaced persons.

What others had to say

Jamiat Ulema-e-Islam-Fazl (JUI-F) chief Maulana Fazlur Rehman said that the lack of implementation of decisions is a major hurdle in the establishment of peace in the country, officials said.Meanwhile, Muttahida Qaumi Movement (MQM) MNA Farooq Sattar observed, “We have been fighting against terrorism but not eliminating its source.”

On a more positive note, Mehmood Khan Achakzai, chief of the Pakhtunkhwa Milli Awami Party (PkMAP) concluded that the political and military leadership being on the same page on national security issues is welcoming, which should be hailed by all of us as it has never happened in the past. – TheExpressTribune