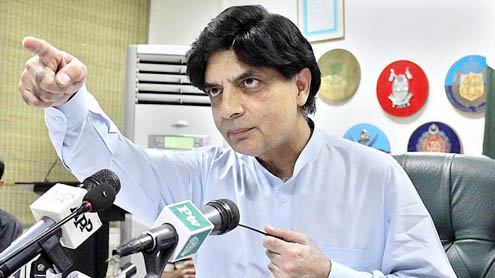 ISLAMABAD: Interior Minister Chaudhry Nisar Ali Khan said on Tuesday that the framework for holding dialogue with Taliban was ready and there was no foreign pressure in this regard.

Addressing a press conference here, Nisar said it was the unanimous decision of all political parties and military leadership to hold talks with the Taliban in the best national interest.“It is our own decision. The draft for the talks is ready, however, I cannot share its details. We will keep you updating and share information as the talks progress,” he added.The minister said it was the government’s prime responsibility to pull the country out of the crisis by prudently analyzing the situation and persuing a pragmatic strategy.Nisar said preparations for holding the All Parties Conference were started two months back and the decision was taken in the best national interest.

”Nothing will be concealed from the nation,” he said.He said the security issue was a very sensitive matter as many hidden forces did not want peace in the country.Highlighting the importance of media’s role in the present scenario, he said it should be more responsible while reporting on security issues,  especially talks with the Taliban, as an unauthentic news item could sabotage the entire process. The media has an important role in consolidating the dialogue process, he added.

He said it was encouraging that the Taliban had also reciprocated the government’s gesture.The minister said the draft on internal security was also ready and the federal government was waiting for input from the provinces.Giving details of the targeted operation in Karachi, he said that the Rangers had conducted 74 raids in various areas and rounded up 158 criminals on the basis of intelligence in the last four days.The minister said 111 weapons and 1,862 ammunition were recovered from the arrested extortionists, targets killers and kidnappers.

Besides, the Karachi police also arrested 516 criminals, involved in various street and other crimes during this period, he added.Replying to a question, he said that the Balochistan Chief Minister had been given a mandate to hold talks with the Baloch nationalists and convene a conference in Quetta in which the Prime Minister would also participate.He rejected any kind of agreement on drone attacks and the Chief of the Army Staff had also conveyed the same to PTI chief Imran Khan. – APP