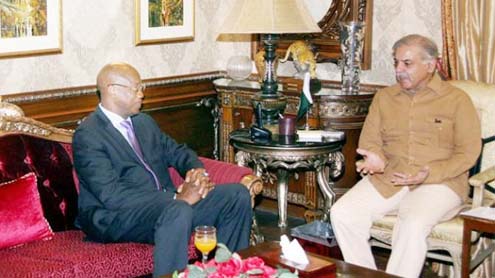 LAHORE: Punjab Chief Minister Shahbaz Sharif has said theprovision of jobs to skilled and educated youth is a big challenge and, in this connection, the Punjab government has planned to set up the Punjab Rozgar Bank.

He was talking to a delegation of the Islamic Development Bank led by its Vice President Birama Boubacar Sidibe.He said Pakistan was a country of 180 million people and its 60 percent population consists of youth aging from 15 to 30 years.He said loans on soft terms would be provided to the youth for business through the Punjab Rozgar Bank. He said under this programme, the Punjab government was adopting the same model for providing interest-free loans to the youth, as was continuing successfully in the province for the last two years.

The chief minister said the Punjab government had provided loans from Rs 10,000 to Rs 50,000 to more than 200,000 people during the last two years only on merit and now these people were not only earning their livelihood honourably but also helping their families.Matters relating to cooperation in energy, infrastructure and other sectors were also discussed during the meeting.Shahbaz Sharif said Pakistan was facing a serious energy crisis due to which the economy, agriculture and industry had slowed down. He said the government was taking steps rapidly for coping with the problem of load-shedding and a national energy policy had been announced unanimously.

He said the Quaid-i-Azam Solar Park was being set up on 11,000 acres of land in Bahawalpur. He said plans had been made to generate 1,000-megawatt electricity through the solar park under a phased programme whereas the Quaid-i-Azam Solar Power Company had also been set up for providing facilities to the investors and for infrastructure development.The chief minister said the Punjab Energy Council had been constituted for working rapidly on energy projects in the province. He said viable projects were being planned for generating energy through biomass and biogas. He saidthe Punjab government had also set up an infrastructure development fund and the government was making efforts for generating energy through alternative sources.

Shahbaz Sharif said both Dasu and Diamir Bhasha dams are very important for Pakistan and the Islamic Development Bank should consider cooperation in the energy sector. The chief minister said revolutionary steps had been taken in the education, health, infrastructure, transport and other sectors in Punjab during the last five years.He said educational scholarships were being provided to more than 50,000 deserving male and female students through the Punjab Educational Endowment Fund and the volume of this fund had reached Rs 12 billion.

Shahbaz Sharif said the Skills Development Programme was continuing successfully in Punjab with the cooperation of the DFID. He said the scope of the Skills Development Programme had been extended from four to 18 districts of South Punjab and thousands of skilled people were benefiting and earning their livelihood through this revolutionary programme.

The chief minister told the delegation that the government was pursing the agenda of economic reforms for solving the problems facing the country. He said the assurance of cooperation by the Islamic Development Bank in various sectors, including energy, was a good omen.Islamic Development Bank Vice President Birama Boubacar Sidibe said Pakistan was a very important country due to its geographical location and the IDB was willing to extend further cooperation to Pakistan in various sectors. He said he was impressed by the developments made in Punjab.

Meanwhile, American Ambassador to Pakistan, Richard Olson, met Shahbaz Sharif in Murree and matters of mutual interest were discussed during the meeting.Shahbaz Sharif said there were deep friendly relations between Pakistan and America. He said after winning the general elections, the federal and the Punjab governments were endeavouring to resolve the energy crisis, restore the economy and eliminate terrorism from the country. The chief minister said the provision of all possible facilities was being ensured to foreign investors interested in launching energy projects in Pakistan. – DailyTimes