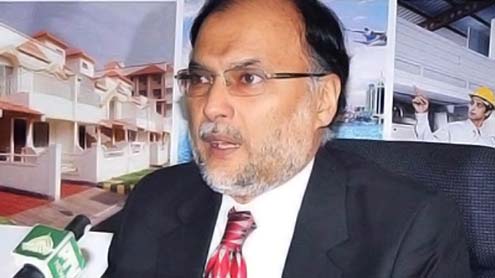 D.G KHAN: Federal Minister for Planning and Development Ahsan Iqbal Saturday said that Katchi canal project would be completed in three years which will irrigate 700,000 acre land of Balochistan.

Talking to journalists here at a local airport, he said, initially the project would irrigate 150,000 acres land which would be increased further with the passage of time.He said, the project was originally kicked off in 1989-99 with at a cost of Rs 30 billion. He said the project would not only boost economy of the country but also remove decades long deprivations of the people of Balochistan.The minister said, he had made aerial visit of the project, from Sibbi to Dera Ghazi Khan along with Nespak, Wapda and other technical experts.

During the visit, he said that the technical team pointed out some shortcomings that would be addressed over the time.He said that prosperity of Balochistan was the prosperity of the country.He said, a Pak-China common road would be built from Gwadar to Khanjrab which would benefit to tribal areas of Punjab, Balcoshistan and KP provinces.Furthermore, the road would also prove to be beneficial for western under developed areas along the River Indus.Ahsan Iqbal said, they didn’t believe in vindictive actions, but he believes in making the country prosperous.

He said the PML-N government was taking drastic steps to revive the economy of the country.He said that his government had re-paid loan of $3 billion to the IMF.He said, the nation had mandated them for getting the economy strengthened, however, measures being adopted in this regard. “Strengthening economy means strengthening of foreign policy,” he remarked.

He said, the prime focus of their government was to end load shedding and terrorism by improving economic condition of the country.He said the purpose of APC was to overcome terrorism in KP, Karachi and Balochistan provinces. He said, they had taken all political parties on board before giving green signal to law enforcement agencies to launch targeted operation in Sindh. – APP