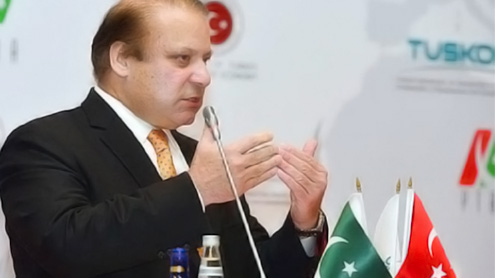 ISTANBUL: Prime Minister Muhammad Nawaz Sharif Wednesday invited the Turkish businessmen and entrepreneurs to tap and explore vast investment opportunities that existed in Pakistan, particularly in the areas of energy, housing, construction and infrastructure, textile, agro industry and the oil and gas.

“Pakistan lies at the crossroads of South, Central and West Asia. Being a market of more than 180 million people, our human resource capital, comprising a youthful, educated and skilled work-force, is second to none in the world”, he said while addressing the Pakistan-Turkey Trade and Investment Forum here. The Prime Minister said, “Pakistan is also endowed with rich and untapped natural resources. Our coal reserves in Sindh are one of the largest in the world,” All these advantages coupled with a friendly investment policy offers ideal opportunities for investment in Pakistan, he added.

He said the present government’s primary purpose was to create a conducive environment for trade and investment. “We have a liberal investment policy, which includes 100% equity ownership, full repatriation of capital, tax breaks, customs duty concessions on import of plant and machinery and raw materials.”The Prime Minister said special economic zones had been established with efficient infrastructure and one window facility and more such zones were in the offing.

He said Turkey and Pakistan enjoyed deep-rooted relations, underpinned by eternal bonds of amity and brotherhood.The centuries old love and affection that existed between the peoples of Pakistan and Turkey, was unmatched, he said.“We have a spiritual communion exemplified by the poetry of Allama Muhammad Iqbal and Maulana Jallaluddin Rumi.”Prime Minister Sharif recalled that this year had been a watershed for democracy in Pakistan, as for the first time, a peaceful transition from one elected government to another had taken place.

He said in the historic general elections held in Pakistan in May this year, the people of Pakistan gave a clear mandate to his party and he was humbled by the trust and confidence reposed in him by the people of Pakistan. “It has reinforced my resolve to serve the nation, with dignity and devotion”, he added.He said, “Pakistan has had its share of challenges.  However, the situation is looking up. I have no doubt that our today is better than yesterday and tomorrow would be even brighter.

The agenda before my government is therefore broad and urgent, focusing on the welfare of the people of Pakistan.”Prime Minister Sharif said, “Our vision is a new Pakistan – a Pakistan which is at peace within and peace outside, especially with its neighbours; a Pakistan which is business friendly; a Pakistan where foreign investors would feel safe and secure; a Pakistan which is modern, progressive and forward looking.”He said the present government’s foremost priorities included good and accountable governance; creation of a peaceful and secure environment; economic revival; energy security; poverty alleviation and creation of new jobs.

“The aim of my government is to increase GDP gradually to 7 per cent, enhance foreign exchange reserves to over US $ 20 billion, reduce public debt by 57 per cent of the GDP and to increase investment to GDP ratio to rise to 20 per cent”, he added.The Prime Minister drew the attention of Turkish entrepreneurs to the recent ratings released by the Standard & Poor and Moody, in which they have reposed confidence in Pakistan’s economy, by rating Pakistan from a negative of 34 to a positive of 2.He said since socio-economic development was the priority of his government, the energy sector topped this socio-economic agenda.

“We have formulated an energy policy with the consensus of the provincial governments.”The Prime Minister said the present government was also taking steps to diversify the energy sector, including increase in power generation, use of technology in power distribution, controlling line losses and energy conservation.After assuming office, he said, the present government had undertaken a series of important steps to address the energy shortage, including the clearance of nearly US dollars five billion, generally referred to as circular debt, which has resulted in the addition of 1700 MW to the system.

He also mentioned re-activation of Nandi Power Project, which will add 425 MW to national grid; financial close on two civil Nuclear Power Generation projects with the total capacity of 2117 MW; accelerated work on Neelum-Jhelum Hydro Project with 969 MW generation capacity; and initiation of work on mega projects like Dasu Dam and Diamer-Bhasha Dam.Prime Minister Sharif said the energy sector of Pakistan with its vast potential in thermal, coal, wind and solar areas was ripe for investment. From large projects of over 5,000 MW to small and medium sized projects, the opportunities were wide-ranging.

“I recently inaugurated the Gadani Power Park, comprising ten coal-fired power plants with an accumulated capacity of 6600 MWs.  Similarly, development of the Thar Coal Field is being fast-tracked”, he added.The Prime Minister said the wind power plant established by the Zorlu Energy Company of Turkey in Sindh, represented a landmark and expressed his confidence that this project would encourage more Turkish companies to invest in the vast energy sector of Pakistan.Prime Minister Nawaz Sharif said the provision of low-cost housing was another priority area of his government, as with growing population, the demand for housing in Pakistan was increasing.

He said over the next five years, the government planned to build 500,000 new housing units across the country.The Prime Minister said the Turkish model of social housing developed by TOKI complemented his government’s vision to provide this basic necessity to the disadvantageous section of the society.  “My government will soon announce various housing projects and I invite Turkish investors to participate in these projects.”He said the construction and infrastructure sector was another key element of his government’s developmental agenda and in the coming years, his government planned to construct country-wide new highways and motorways, build new airports, shopping malls and theme parks.

Prime Minister Sharif said the Economic Corridor that will link the Chinese city of Kashgar to the port city of Karachi, was amongst one of the most important initiatives of the government.“We plan on building a high quality modern expressway that will not only connect China and Pakistan as a modern equivalent of the ancient silk-route, but also open up countless economic opportunities for Pakistan from China to Central Asia,” he added.The Prime Minister said his government was also planning on a network of six-lane motorways linking the city of Lahore to Karachi through the city of Multan. Similar modern highways would link other important cities, opening up the deep interiors of the country to unprecedented economic growth and development.

He said another important priority area of his government was urban development, including provision of modern municipal services, solid waste management and public transport.The Prime Minister mentioned that the success of Lahore Metro Bus and Solid Waste Management Projects completed in collaboration with Turkish companies, had inspired other cities in Pakistan to follow the example.  He said textile industry was the main source of export earnings in Pakistan. “The range of our textile products are broad, the quality is of international standard.”

The Prime Minister said the textile infrastructure was vast and modern and the leading international brands had established their production houses in Pakistan.Turkish textile companies with their superior technical capabilities and investment capacity could explore this sector for joint ventures, he said. The abundance of raw material in the shape of bumper cotton yields coupled with cheap and skilled labour provided an additional incentive for any investor, he added.

Prime Minister Sharif also invited the attention of Turkish businessmen to Pakistan’s Agro Industry with a huge investment potential and export opportunities.Pakistan has a strong agricultural base and it is world’s leading producer of cotton, wheat, rice, sugar cane, lentils, fruits and vegetables, he added.The Prime Minister said Pakistan had a top global ranking in production of milk. Capitalizing on this potential, Nestle has established their largest milk reception facility in Pakistan along with many milk production plants across the country, he added.

“Turkish agro companies with their expertise in the food processing technology would find this sector very attractive for value addition and conversion of this ‘white gold’ into cheese, butter and dry milk powder”, he said.Prime Minister Sharif said another important area where Pakistani and Turkish companies can work together, was the oil and gas sector. He looked forward to close collaboration not only in exploration and production but as well as building refineries and pipelines.

He said since the private sector was the engine for growth, the present government wanted to go beyond the traditional state-to-state relations and develop close and intensive business-to-business relations.“The Pakistan-Turkey Joint Business Council and PAK-TURK Business Association are already a manifestation of this objective.  Agreements signed between our various chambers yesterday in Ankara would further strengthen contacts between our two private sectors,” he added.

The Prime Minister mentioned the presence of a strong delegation of leading Pakistani businessmen and CEOs in the hall, representing key sectors of Pakistan, and said he was sure that their interaction with their Turkish counterparts would lead to concrete and solid cooperation.“It is our earnest desire to have greater and more extensive trade and investment relations with Turkey,” he said.The Prime Minister said in his my meetings with both President Abdullah Gul and Prime Minister Erdogan, the two sides agreed on a long term strategic partnership with the prime focus on economic and trade relations. “Your role is central and vital in realizing our shared vision and goals,” he maintained.

He said to realize the shared objective of developing close contacts between the businessmen of the two countries, a strong framework of cooperation was needed.In this context, the Prime Minister proposed to establish a Pakistan-Turkey Chamber of Commerce in both countries, and expressed the confidence that the respective National Federations for Commerce and Industry would work together to establish this body very soon.Inviting the Turkish investors to explore the vast opportunities in Pakistan, the Prime Minister assured that his government would provide full facilitation to the Turkish companies, which desired to do business in Pakistan.

“A special cell has been established in my office to oversee and facilitate Turkish projects in Pakistan”, he said. “We desire a broad-based relationship, which is not only mutually beneficial for both countries but also create a partnership that elevates our existing excellent ties to new heights.”Prime Minister Sharif, while responding to the remarks of Turkish Minister for Economy Zafar Caglayan, who also addressed the Forum, gave the assurance that his government would also encourage the Pakistani businessmen to invest in Turkey, and make earnest efforts for enhanced trade between the two countries.He also appreciated President of TUSKON, Mr Rezanur Meral, and his team for organizing and hosting the important event. – APP