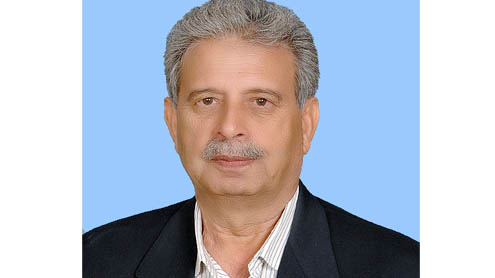 He was talking to Pierre Mayaudon, Deputy Head of European Union Delegation regarding setting up of water filtration plant in the village of District Sheikhupura. The Minister apprised the delegate of the existing situation of water contamination in the village. He said that the situation has become grave due to improper methods of dumping contaminated water flowing out of surrounding industries.

Therefore, the issue of industrial pollution should be addressed and we require help from European Union in facilitating for setting up a filtration plant of clean drinking water.The Minister added that the problem is grave because it is affecting common people of the area.He said,”To provide the basic facility of clean drinking water is the right of the people of my area and I will facilitate them in getting this problem solved. The Chief Minister Punjab is also very keen to address the issue and Insha Allah we will achieve this target”.

Rana Tanveer said during the meeting with European Union Deputy Head of Delegation that he would also like that industrial water gets treated before being dumped in streams of water.Installation of water treatment plant can be done with the help of European Union and this investment will help save 30% of the people of my area from disease which breaks out due to contaminated water.

The Deputy Head of European Union Delegation, Pierre Mayaudon assured of his help. He said that he is happy to know that the Minister is showing great concern on the issue and he would talk to European Union member states to provide all required help in this regard.He also thanked the minister for raising the issue of great concern and giving a detailed briefing to him. The meeting ended with the assurance that the issue will be dealt with on priority basis. – APP