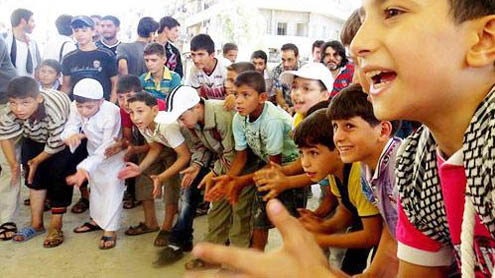 Deputy Prime Minister Qadri Jamil, meanwhile, said Damascus wanted a cease-fire in the 30-month war. He said the war is now in stalemate.Hours before a deadline for President Bashar Assad’s regime to provide details on its arsenal, the Hague-based group tasked with dismantling the arms said it has received an initial report.“The Organization for the Prohibition of Chemical Weapons has received an initial disclosure from the Syrian government of its chemical weapons program,” an OPCW statement said.

Its Technical Secretariat is now examining the details, it said.A UN diplomat said the OPCW had received the Syrian declaration on Thursday. “It is quite lengthy,” he said.One Western diplomat warned that a failure by Assad to account for all the suspected stockpile would cause world powers to seek immediate action at the UN Security Council to force Damascus to comply.

If there were gaps in the documentation, the diplomat said, “this matter is going to go straight to the Security Council.”US Secretary of State John Kerry said he and his Russian counterpart Sergei Lavrov spoke on the telephone about a “strong” UN Security Council resolution on ridding Syria of chemical weapons.Syria’s deputy prime minister, meanwhile, said Damascus would call for a cease-fire if long-delayed peace talks in Geneva take place.“Neither the armed opposition nor the regime is capable of defeating the other side,” Jamil told Britain’s Guardian newspaper.Asked what his government would propose at the stalled Geneva II summit, he replied: “An end to external intervention, a cease-fire and the launching of a peaceful political process.” – ArabNews