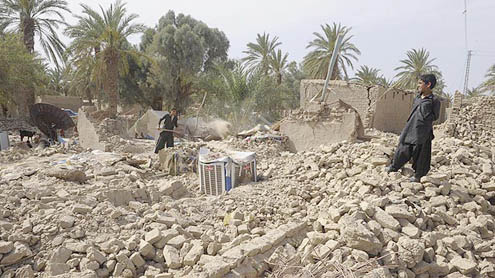 QUETTA: A huge earthquake hit Balochistan on Tuesday, killing at least 55 people, toppling scores of homes and sending people around the region rushing into the streets in panic.

The 7.8-magnitude quake centred in the province’s Awaran District and was felt as far afield as New Delhi and Dubai, residents said. Officials said the quake, which struck at 4:29 pm, demolished dozens of houses in Awaran, 350 kilometres southwest of Quetta. Its epicentre was 20 kilometres below ground. The area is sparsely populated and most buildings are mud-built. But the US Geological Survey issued a red alert, warning that heavy casualties were likely based on past data.

Awaran Tehsildar Ilahi Bakhsh confirmed 55 people had died in Awaran Township alone. Meanwhile, Asad Gilani, one of the most senior officials in the Balochistan administration, told AFP that 100 people were injured in the quake. “A large number of houses have collapsed in the area and we fear the death toll may rise,” said Rafiq Lassi, police chief for Awaran district. The provincial government declared an emergency in Awaran and the military mobilised medical teams as well as 200 soldiers and paramilitary troops to help with the immediate relief effort.

“We have received reports that many homes in Awaran district have collapsed. We fear many deaths,” Jan Muhammad Baledi, a spokesman for the Balochistan government, said on a private news channel. “There are not many doctors in the area but we are trying to provide maximum facilities in the affected areas.” Television footage showed collapsed houses, caved-in roofs and people sitting in the open air outside their homes, the rubble of mud and bricks scattered around them.

Balochistan Assembly Deputy Speaker Abdul Qudoos Bizinjo told a private news channel there were reports of “heavy losses” in Awaran. Damage to the mobile phone network was hampering communications in the area, he said. Awaran district has an estimated population of around 300,000, scattered over an area of more than 21,000 square kilometres. Tremors were felt as far away as the Indian capital and even Dubai in the Gulf, while office workers in the Indian city of Ahmedabad near the border with Pakistan ran out of buildings and into the street in panic.

In April a 7.8-magnitude quake centred in southeast Iran, close to the border with Balochistan, killed 41 people and affected more than 12,000 on the Pakistan side of the border. Kalat Division Commissioner Dr Akbar confirmed 33 deaths and 28 injured, saying most of the deaths were reported from Mashkey. He said more than 15 people were killed in Mashkey. The commissioner said that two medical teams, one from Khuzdar and the other from Uthal, had been dispatched to Awaran. All the hospitals in the entire division had been placed on high alert so the injured could be treated within Balochistan. Dr Akbar said in case of overwhelming number of casualties the injured can be dispatched to Karachi for better treatment.

The quake also led to the emergence of an island off the coast of Gwadar. It is 100-feet high and lies at a distance of around one kilometre from the coast, and has re-emerged after a lapse of 67 years. It was last seen in 1947. The area where this island is located has been named as “Zalzala Koh” (Earthquake Mountain) by the local fishermen. – DailyTimes