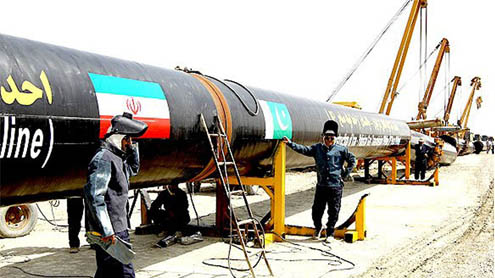 NEW YORK: Prime Minister Nawaz Sharif has said that Pakistan will proceed with a plan to build a gas pipeline from Iran, despite objections from the United States, and that he plans to raise the issue of American drone strikes in his speech to the United Nations General Assembly.

In an interview in New York with The Wall Street Journal, Nawaz Sharif  also spelled out the conditions that Pakistani Taliban would have to accept if his government proceeded with a peace deal with the militant group, demanding that they lay down arms and recognize Pakistan’s constitution. At the same time, he voiced fears that continued US drone attacks would wreck his policy to negotiate with the Pakistani Taliban.Nawaz Sharif hoped to use his visit to the U.N. headquarters in New York for a meeting with Manmohan Singh, the prime minister of India. He said he hoped to restart the peace process with India that he had pursued when he was last in office, in the late 1990s.

In the interview Wednesday, Nawaz Sharif acknowledged frictions with the US but said he believed that the issues could be overcome. “President Obama was very kind to call me up immediately after my election and express his desire to work with Pakistan. I also want to work with the United States of America,” he said.The White House said Thursday that President Barack Obama and Nawaz Sharif will meet on October 23 at the White House, part of what officials said was a broader effort to deepen ties.

Pakistan, the newspaper noted,  has said it wants the US to open its markets to Pakistani products, among other things, while the Obama administration has urged Pakistan to do more to police border territory where Afghan Taliban and al Qaeda militants flourish.Nawaz Sharif met Iranian President Hasan Rouhani on the sidelines of  the UN General Assembly on Tuesday, where the issue of the pipeline was discussed, in a meeting described as warm by the Pakistani side.

“Pakistan needs gas very badly,” said Nawaz Sharif,” was quoted as saying in the Journal. “We have to run our power plants. We need gas for them. There is an acute shortage of gas in Pakistan, so we have to import gas from somewhere.”An inadequate supply of gas, used to produce electricity, is one of  the main reasons for the crippling shortage of power in Pakistan.Nawaz Sharif said Pakistan had a contractual obligation to go ahead with the agreement, or face penalties from Iran of $3 million a day if it is not completed by the end of next year. He said that in Islamabad’s legal opinion, the pipeline wouldn’t trigger the sanctions.

He said that Pakistan would proceed “unless you give us the gas, or the $3 million a day.”In his speech on Friday at the U.N., Sharif said he planned to say that American drone strikes in his country were illegal, as they breached Pakistan’s territorial sovereignty. He said that weapon was also counterproductive as it was producing more “terrorists.”“The more the drones, the more the terrorists get multiplied. You kill one man, his sons, his father, his brothers, they become terrorists. So this is something that is not helpful.”

Nawaz Sharif said he was particularly concerned that drone strikes now could derail his offer of peace talks to the Pakistani Taliban, who operate separately from the Afghan Taliban. The militant group has demanded that Islamabad stop the drone strikes before negotiations begin.“Once the talks start, then of course, we consider them [drones] as something that has the ability to break the talks, which must be avoided at all costs,” he added.

Islamabad offered to open dialogue with the Pakistani Taliban following a conference with all the other parliamentary parties earlier this month.“They will have to renounce terrorism,” said Nawaz Sharif. “They [Pakistani Taliban] will have to abide by the Constitution of Pakistan.”“It’s been often said by them that they don’t recognize the constitution of the country,” he said. “But the constitution has to be recognized. If we agree on addressing this terrorism, they will have to be disarmed, lay down their arms.” – APP