A Diplomat to Head CCNS Secretariat 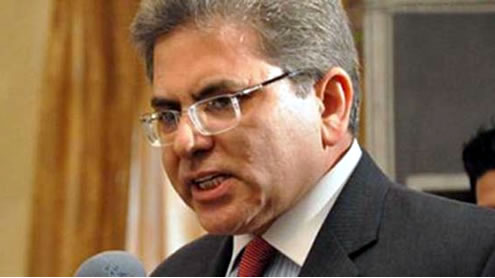 ISLAMABAD – The PML-N government has decided to appoint a career diplomat, Ambassador Mohammad Sadiq, as the administrative head of the Secretariat of the Cabinet Committee on National Security (CCNS).

The newly appointed head will be reporting to the National Security Advisor Mr Sartaj Aziz. The secretariat of the CCNS will however be based in the PM’s Secretariat. “Pakistan’s incumbent ambassador to Afghanistan, Mohammad Sadiq, will soon be appointed secretary of the CCNS secretariat,” informed sources told The Nation. In Afghanistan Ambassador Sadiq will be replaced by another career diplomat, Syed Abrar Hussain, currently Pakistan’s ambassador to Kuwait. Before Ambassador Sadiq, the government reportedly offered this position to the accomplished and highly rated diplomat former foreign secretary Riaz Mohammad Khan. But he declined on personal grounds. In the last government Mr Khan was Pakistan’s back channel envoy for India.Many believe Ambassador Sadiq’s removal from Kabul at this point should have been avoided. Exceptionally well-connected and well-travelled in Afghanistan he should have been retained there at least till the presidential elections scheduled for April.

Ambassador Sadiq has regularly been debriefing the PM secretariat, the Foreign Office and the military establishment on the Afghanistan situation and the potential and expectations from Pakistan on the Afghan reconciliation process. He travels from Kabul to Islamabad almost every week for consultations with the PM and his core foreign policy team.

Mr Sadiq is an experienced diplomat who served as spokesperson of the Ministry of Foreign Affairs prior to his appointment as ambassador to Afghanistan in December 2008. He has been assigned key diplomatic posts in Beijing, Brussels and was deputy head of mission in Washington in 1998-2000. The Defence Committee of the Cabinet in its meeting on August 22, with Prime Minister Nawaz Sharif in the chair, had given the green light for its reconstitution as CCNS to expand its scope and to make it more effective.

To be headed by the Prime Minister, the CCNS will have as its members ministers of foreign affairs, defence, interior and finance, JCSC chairman and the three services chiefs – Army, Navy and Air Force. “The reconstituted committee will focus on the national security agenda with the aim to formulate a national security policy that will become the guiding framework for its subsidiary policies – defence policy, foreign policy, and other policies affecting national security,” is how the PM secretariat summed up its overriding objectives. The CCNS includes a two-tier structure with a planning committee and advisory board to assist it, it is learnt. The planning committee will be headed by PM’s Advisor on National Security and Foreign Affairs, Mr Sartaj Aziz, and will have key cabinet members, intelligence representatives and federal secretaries as its members.

The advisory board too will be headed by the PM’s advisor. The board will have think-tanks and subject experts as its members. The primary objective of the CCNS is to ensure that policy is implemented in a coordinated and effective manner with all the key stakeholders on board. Its mandate will be that of oversight body to monitor implementation of the national security policy that will have inputs from all relevant ministries and state institutions. This is the first attempt to have a comprehensive, all-inclusive institutionalised oversight mechanism organised at various critical levels of policy-making and policy implementation.

The Prime Minister in his first televised address to the nation after assuming office called for a bold review of Pakistan’s foreign policy and an effective response to the internal and external security challenges faced by the country. – Nation