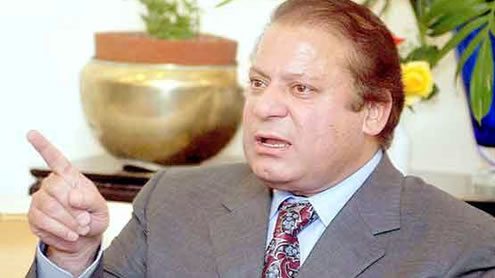 ISLAMABAD: Prime Minister Muhammad Nawaz Sharif on Thursday directed that lacunas in the anti terrorism laws must be removed to ensure that culprits involved in heinous terrorist activities are fairly punished.

The Prime Minister was chairing a meeting on Anti-Terrorism Legislation here at the PM House. “There should be no gap and loophole in the anti terrorism laws which allow the terrorists to get away with dreadful crimes. We need strong, transparent but stringent laws to cope with the menace of terrorism. The required amendments must be finalized as soon as possible”, said the Prime Minister.

He underlined the need of amending the existing laws so that people involved in the brutal and inhuman activities are bought to book and penalized under the laws of the land. The meeting was also attended by Minister for Interior, Ch. Nisar Ali Khan, Minister for Information, Broadcasting and National Heritage, Parvaiz Rasheed, Minister for Science and Technology, Zahid Hamid and senior officials of the PM office. – App

A car chase, deadly shooting and rattled US Capitol