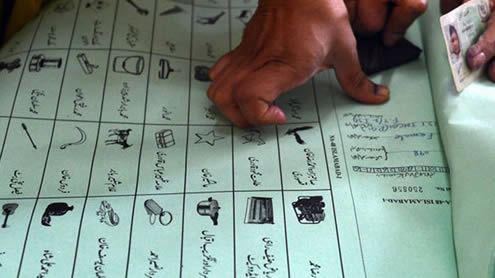 KARACHI: The poll for a National Assembly seat (NA-256) in Karachi was massively rigged in the May 11 general elections, a National Database and Registration Authority (NADRA) report submitted to an election tribunal revealed on Monday.

The Nadra report revealed that there were 11,343 ballot papers that contained invalid national identity card numbers, which were never issued by Nadra. 791 votes were found not registered in the constituency and the fact was ascertained on the basis of the CNIC numbers mentioned on the used ballot papers. This bogus voting was observed in three different polling stations of the constituency.

Besides, report said that there were 5,839 duplicate votes, which were cast by as many as 2,812 voters mainly in two polling stations. It said as many as seven votes were cast on one CNIC belonging to a resident of Gulistan-e-Jauhar neighbourhood of the city. As many as 314 ballot papers were found without having fingerprints on them. The report said that only 6,815 of the total 84,748 ballots sent to Nadra for verification of certain polling stations were successfully authenticated.

The thumb impressions on 57,642 ballots could not be compared or matched through the Nadra system because the fingerprints were of very poor quality. The report said 1,950 votes failed authentication, because someone else voted against the CNIC number mentioned on the used counterfoils. An earlier report presented by Nadra regarding voter verification for NA-258 Karachi had also revealed voter fraud. – Dawn