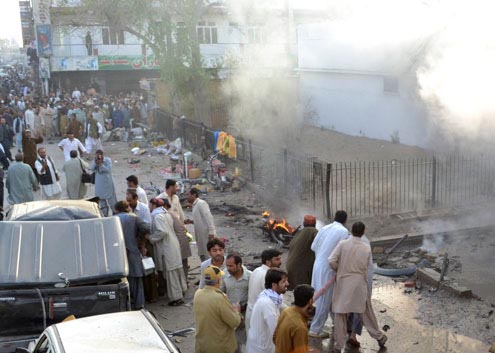 Bomb attacks hit all four provincial capitals (Peshawar, Quetta, Lahore and Karachi) and a northwestern district in Pakistan on Thursday, killing ten people and wounding more than 60, a day after the Taliban chief said his outfit would not hold dialogue (with the government) through the ‘media.’

In the day’s deadliest attack, a bicycle bomb tore through a crowded market area near a police station in the restive southwestern city of Quetta, killing six people and injuring art least 35 others. Earlier, a low-intensity blast at a restaurant killed one person and wounded 13 in a popular food street in Lahore, the normally relatively peaceful capital of Punjab province which is the powerbase of Prime Minister Nawaz Sharif. The country’s main political parties last month backed Sharif’s proposal for peace talks with the Taliban, who have been waging a bloody insurgency against the state since 2007. But a spate of bloody attacks in recent weeks – including more than 140 killed in the space of a week in the northwestern city of Peshawar – have led many to question the idea of negotiations. A third blast on Thursday wounded a police officer on the ring road in Peshawar, the capital of Khyber Pakhtunkhwa (KP) province, which has regularly been hit by gun and bomb attacks in recent years. Later in the evening, at least 12 soldiers were wounded when a security forces’ patrol vehicle was targeted by a remote control bomb in the semi- tribal area of Bannu in the northwestern KP province. Meanwhile in the latest incident, three suspected terrorist were killed while trying to move explosives in Karachi – the capital of southern Sindh province which is also dubbed as economic hub of Pakistan.

A local police official told Dawn.com that explosives detonated unexpectedly in Manghopir area when three suspected militants riding a motorcycle were trying to move the explosives to a target, killing all three on the spot. Those killed in the Quetta attack included a policeman, city police chief Abdul Razaaq Cheema told AFP, while women and children were among the wounded. “It was a timed device which was planted in a bicycle. Six people have been killed and 35 wounded,” he said. Rescue and hospital officials confirmed the death toll while a bomb disposal expert put the size of the device at around six kilograms (13 pounds). Quetta, the capital of Balochistan province, suffers regular violence from Islamist insurgents, separatist rebels and sectarian militants. Attacks on Lahore are rarer, though the Anarkali bazaar area hit on Thursday was also the scene of a bombing in July which killed five people.

Senior police officer Rai Tahir confirmed the death toll and said the bomb appeared to have been a relatively low-powered device. TV footage showed broken tables and chairs outside a small restaurant in the stree of food shops and stalls, where the bombing in July killed five people and wounded nearly 50 others. That attack was the worst bombing in Lahore since a teenage suicide attacker targeted a Shia Muslim religious procession on January 25, 2011, killing at least nine people. There was no immediate claim of responsibility for the blast, which came before the main lunchtime rush of customers in the area. Mohammad Kaish, owner of the restaurant, told reporters at the scene that he had not received any threats from militants. Kaish was unhurt but his son was critically wounded. Shopkeeper Ghulam Mustafa told AFP that the blast shattered nearby shops and people started running around in panic. It was a big explosion and I saw people running here and there. Then we saw injured laying and screaming on the ground,” Mustafa said, adding that people took most of the injured to hospital in private vehicles. A bomb disposal officer told reporters at the site of the Lahore blast that more than a kilogram of explosive was used in the bomb.

Thursday’s attacks came a day after a rare video interview was broadcast with Pakistan Taliban leader Hakimullah Mehsud, who said he was still open to peace talks but complained the government had not taken any serious steps to begin a dialogue. Mehsud, who has a $5 million US government bounty on his head, said he would continue to target the United States and its allies and reiterated the demand that any ceasefire in Pakistan must include an end to US drone strikes. Pakistan’s main political parties last month backed a government proposal to seek negotiations with Mehsud’s Tehrik-i-Taliban Pakistan (TTP) group, who have been waging a bloody insurgency against the state since 2007. The TTP faction responded with a list of preconditions, including a government ceasefire and the withdrawal of troops from the tribal areas along the Afghan border where the militants have hideouts. Thousands of people have been killed in bomb and gun attacks by homegrown Islamist militants in Pakistan in recent years. The violence has largely focused on the country’s northwest, where Taliban and al Qaeda militants have hideouts in the tribal areas along the Afghan border.