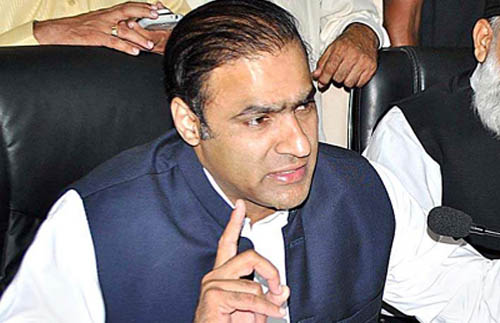 The Minister of State for Water and Power Abid Sher Ali ordered Islamabad Electricity Supply Company (IESCO) on Tuesday to disconnect the electricity supply to the President House.

During a press conference in Islamabad, Abid Sher Ali said that the electricity connections to all institutions as well as individual consumers who have not paid their bills will be disconnected. He stated that it was unfair to say that any one province was being target, further stating that the ministry will not let anyone steal electricity whatever the location may be. The minister also revealed that the Sindh owed Rs56 billion in electricity dues while Azad Kashmir owed Rs33 billion, adding that a campaign against electricity thieves had been started. Ali also said that he has told Prime Minister Nawaz Sharif that if markets were closed around 8pm then 1000 megawatts of electricity can be saved.

Referring to the recent disconnections, Sindh Chief Minister Qaim Ali Shah, while addressing the Sindh Assembly today, said that he requests the premier to restore the electricity supply that was disconnected. He added that people who disconnect electricity illegally can be arrested. The chief minister also said that the provincial government was ready to pay the dues of the people who could not pay their bills. Reading out the rights of the Sindh government, Shah stated that the Sindh government has the right to build grid stations for transmission of electricity within the province.