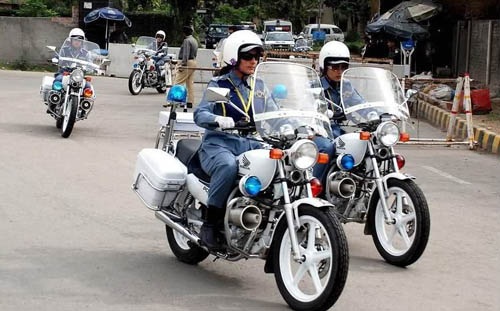 Nasreen alias Sonia was performing traffic duties at Thokar Niaz Baig area of Lahore. Problem was, she was neither a traffic warden nor was her uniform real.

Nasreen didn’t realise that the City Traffic has not deployed a single female warden at traffic signals across the provincial capital. This raised the eyebrow of two women passerbys who happened to be real traffic wardens. Since there are only a handful of female wardens in Lahore, it didn’t take much time for the wardens to recognise that Nasreen wasn’t a colleague. Suspicion led to investigation with the arrival of a senior traffic official. Nasreen alias Sonia was then taken into custody by the Chung Police.

Upon inquiring Nasreen claimed that the uniform was allegedly given by a serving traffic warden Imran, who was deployed in the Gulberg area of Lahore. “Imran wanted to marry me, but I refused because I am married and have three children.” According to Nasreen, she however chose to wear the uniform for as long as two months and only used the uniform to get free bus tickets whenever she would need to travel outside Lahore. Nasreen added that during those two months she hasn’t given any commuter a traffic violation ticket. An FIR has been lodged against Nasreen and an investigation is underway against her alleged friend warden Imran. –dawn